Jon Rahm looked in good form after returning to the PGA Tour after more than two months. 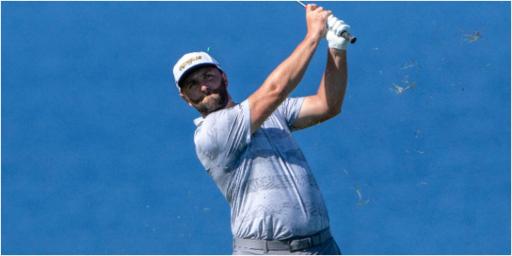 Jon Rahm flew out the blocks in the first round on the PGA Tour of 2022 but he trails Australian Cam Smith by one shot at the Sentry Tournament of Champions at the famous Kapalua in Hawaii.

Smith sank two massive eagle putts on his way to an opening 8-under 65.

At the stunning Plantation Course, the field is stacked with Smith leading by one stroke over the returning foes Rahm (66) and Cantlay (66).

"I still think I'm a little rusty and I saw that in my start," Cantlay told the media after his round. "I got away with a couple of loose swings and one flier on the sixth hole where I was able to make par, but maybe shouldn't have."

The eagle has landed

Those Smith eagle putts were a 44-footer on five and a 37-footer on 15 as he showed what makes him such an exciting player to watch.

Rahm, too, also appeared to not have let his extended break from the game take him off his stride. He cut a similar tone to Cantlay who said you can always expect "a bit of rust".

But he added: "I took time off, but I wasn't on the couch doing nothing. I was still working out. I was still practicing as if I was still in the season. I took maybe three weeks off of golf, which were very needed. But even though I was home, I was practicing."

The world number one hasn't been seen since he played poorly at Valderrama at the back of last year and spoke of how he didn't want to see a golf club again for a long time.

But in Hawaii Rahm looked like he didn't miss a beat as he shot a bogey-free 7-under in an encouraging start to the year.

His foe Cantlay is also one shot back alongside the similarly impressive Daniel Berger.

Dialed in. @JonRahmPGA plays the slope to perfection to get within 2. pic.twitter.com/BrKLcplwDE

It's hilly for Philly

For Lefty had his struggles on day one. The 51-year-old, who will be $8 million richer after playing this event, had to grind his way to an opening 2-under par 71.

"It's a beautiful place," Mickelson told the media. "But it is a hard golf course to walk. I'm hurting. It's vertical. It's hard. It's not easy. And that was the biggest challenge because I was winded going up and down those hills."

What else? Fans on social media were again complaining about the fact the players here were allowed to lift, clean and place. Particularly on a picture-perfect day in Maui. The PGA Tour insisted it was due to wet conditions...