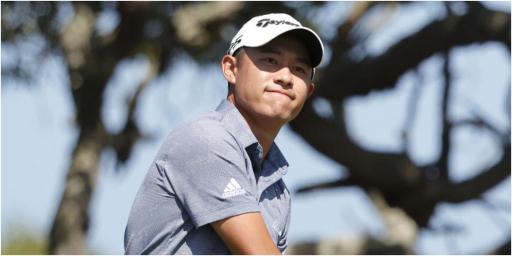 Collin Morikawa has revealed he was more nervous popping the question to his long time girlfriend Katherine Zhu than playing golf at the elite level.

Morikawa has made his return to the PGA Tour this week at the Sentry Tournament of Champions after a break for the holiday season and showed littles signs of rust in the Hawaii.

It is as you would expect for the 24-year-old, who already has a couple of majors under his belt and a handful of tour wins. What exactly will his career look like when he finally calls it a day? Surely the supremely talented ball striker will be a future hall of famer.

But despite being able to keep his cool on the golf course in tense moments, Morikawa revealed on the day he popped the question to Zhu, who also is very talented at golf, he was more nervous than he has ever been.

Related: What is Collin Morikawa's net worth?

"Golf, I do it every day. Like it's normal. Proposing is not."

5 wins, 2 majors, the Ryder Cup. None of it compared to dropping to one knee for @Collin_Morikawa. pic.twitter.com/4ADQKLTSIk

"No, not even close. Way more nervous proposing. It's not even the same. It's not even in the same boat. It is so far gone. I mean golf I do it every day. It's normal. Proposing is not. That morning I practiced with my caddie in the Bahamas and we were on a cart and I was driving into ropes and going all over the place. It was nerve wracking."

Morikawa proposed to Zhu, who he met in college, in early December. He had been planning the proposal for a long time even before he was crowned the Race to Dubai champion after claiming the DP World Tour Championship in sensational fashion.

Morikawa previously told the media: "We met in college and just clicked. It's crazy because I won my first college tournament that next week and we've done pretty good since - it's really fun.

"I think she beats me on probably 70 per cent of our chipping competitions. It actually makes me a better player. What's great about her is that we're always competing.

"To have her around on off weeks when no one's around, she can always bring a wedge to the course and we can always do something fun."

The couple began dating in Apirl 2017. They shared their anniversary on their Instagram page last year."