Viktor Hovland suffered serious difficulty on the 14th hole at the Sentry Tournament of Champions which led to a double bogey. 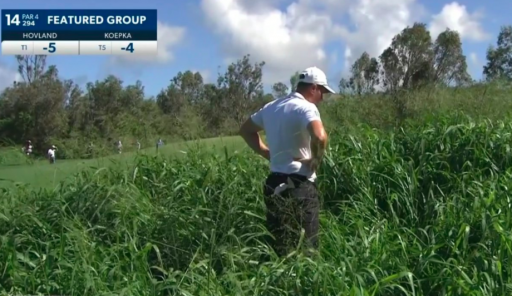 Viktor Hovland was cruising in the first round of the Sentry Tournament of Champions when he encountered some incredibly long grass on his back nine.

The popular Norwegian was stood on the 14th tee box of the Plantation Course, moving smoothly on 5-under-par. But his tee shot went right and found the longest grass you could wish to find on a golf course.

Hovland had a "pretty good lie" as he described it himself, but he was forced to take a drop. On the 294-yard par-4, he hit his next shot into the greenside bunker and he was staring a big score in the face.

The World No.7, the second-highest ranked European player in the world, went on to make a double-bogey six and dropped back to 3-under-par for the round.

RELATED: JUSTIN THOMAS HAS "GROWN AS A PERSON" AS HE RETURNS TO SCENE OF HOMOPHOBIC SLUR

Tee shot in this #Provisional pic.twitter.com/nCpfV947Q4

As he showed at the Hero World Challenge in December, the tournament hosted by Tiger Woods which he won, Hovland is an extremely impressive player and he bounced back with a fantastic eagle at the par-5 15th hole.

So all was not lost for Hovland who is aiming to continue his fine form on the PGA Tour in Hawaii. He added another victory to his young career at the World Wide Technology Championship at Mayakoba in November.

Now a three-time winner on the PGA Tour, 2021 was also a special year for the 24-year-old because he made his debut for Team Europe at the Ryder Cup.

During Hovland's plight on the 14th and 15th holes, Garrick Higgo and Joel Dahmen posted solid scores of 68 to set very early clubhouse leads of 5-under-par.

The Plantation Course at Kapalua is one of the few courses on tour which is a par 73. The venue has played as host to this event since 1999.