Although Jon Rahm went on to tie for the lead on Thursday at the Farmers Insurance Open, he wasn't entirely happy with his game. 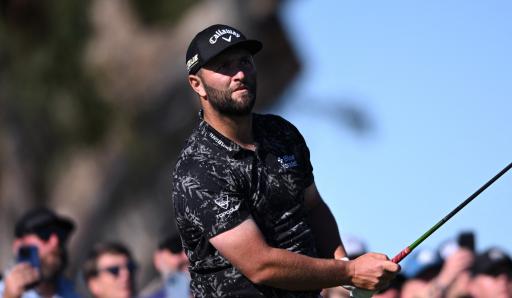 Jon Rahm went through a brief trance of complete rage during his second round of the Farmers Insurance Open at Torrey Pines.

On the 2nd hole on the North Course, Rahm hit a drive that he clearly wasn't happy with. As his playing partners walked off, Rahm stayed on the tee box and vented his rage.

The Spaniard slammed his driver on the ground multiple times. He is known for his fiery behaviour on the PGA Tour, but this was a particularly strong outburst.

He shares the halfway lead with Americans Justin Thomas and Adam Schenk on 13-under-par. Thomas was also in scintillating form, carding a 9-under-par 63 on the North Course.

Live look at everyone who didn’t bet Jon Rahm this week pic.twitter.com/f7aNGnVrcb

Despite being in the thick of contention and showing great form in 2022 in general, this outburst is not the World No. 1's only show of anger this week in San Diego.

Last week at The American Express, where he finished tied 14th, Rahm was overheard describing the event as a "putting contest."

This comment was met with opposition by six-time major winner Sir Nick Faldo, who said he didn't hear Rahm complaining when he shot 33-under-par in second place at the Sony Open in Hawaii.

Faldo also couldn't understand his outburst on the second hole. "Top of the leaderboard and he is losing his head." Rahm's quest for improvement and perfection is clearly neverending.

The 27-year-old has an affinity with Torrey Pines. He won the Farmers Insurance Open in 2017 and won the US Open at the venue in 2021.

NEXT PAGE: PRINCE ANDREW RELINQUISHES MEMBERSHIP WITH R&A AMID SCANDAL