Greg Norman on Saudi-backed golf series: Players are DYING to get out there

The Great White Shark has been speaking publicly for the first time since plans were revealed for a 10-event series on the Asian Tour. 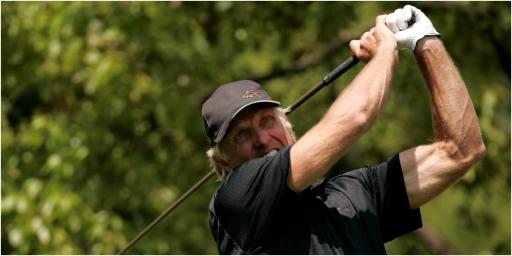 Greg Norman has broken his silence and lifted the lid on plans for the Saudi-backed golf series for the first time.

In an interview with Dan Rapaport for GolfDigest, Norman spoke about the controversial source of the money.

Topics included who might play in these events, how the PGA Tour has reacted and the future of this massive venture.

As you would expect, the tough questions were asked and Norman deflected the majority instead trying to focus on game's growth.

Norman has been named CEO of LIV Golf Investments which will receive money from the Public Investment Fund of Saudi Arabia.

The Austalian claimed the 10-event series planned under the umbrella of the Asian Tour was because the game needed more attention there.

MORE: JORDAN SPIETH BACK WHERE HE BELONGS

This has been described by critics in the golf world as a deft move to potentially avoid legal issues with the PGA Tour and European Tour.

Then what happens next is anyone's guess but it is expected they will attempt to set up on their own, depending on the success of these events.

Norman explained to the publication that he has drawn inspiration from seeing other businessmen transforming golf in deprived areas.

He told GolfDigest: "My dream is to do the same with Asia.

"If we have an opportunity to invest and grow the game of golf through our investment dollars in Asia, God bless us.

"There’s nothing wrong with that, and no one should decry us for doing that.

"I just get a little bit miffed as to why people feel so against me wanting to do that through LIV Golf Investments."

Norman, 66, was asked about the controversial source of the money and how it will be spent going forward as the series develops.

"It' a collective yes," he told the publication. "We're going to sit back and look at it.

"Asia has been suffocated because of COVID. The players are dying to get out there and playing."

Norman explained that the Public Investment Fund (the majority investor) is a commercial operation and defended them as very autonomous.

He claimed they're passionate about the game of golf.

If Greg Norman was on a top-tracer at The Open in 1993 at Royal St George's pic.twitter.com/bcLM4S0KS9

"I've been going to Saudi Arabia now for three years. I was invited to do a golf course design project there," he said.

"Unless you actually go there and see and understand exactly what’s happening there, you [can't] sit back and make judgmental calls.

"I made the journey there to look at what was happening in Saudi Arabia before I made any decision on anything because I’m not a person who makes judgement calls.

"I make sound decisions on sound facts and information that is presented to you.

"So when the PIF wanted to become a majority investor, I knew what was happening in the country.

"Women's right issues - the women there now, I've been so impressed.

"You walk into a restaurant and there are women. They're not wearing burkas. They’re out playing golf."

MORE: THIS TIGER WOODS PUMPKIN WILL BLOW YOU AWAY

This answer was accompanied by an editor's note explaining how Saudi Arabia ranks 147th out of 153 over gender issues.

Women still face discriminatory behaviour in relation to getting married, getting divorced, healthcare issues and matters relating to children.

The Crown Prince of Saudi Arabia is widely accepted to have also given his approval for the murder of journalist Jamal Khashoggi.

Norman would not say whether they will create a new entity.

But he said the series of 10 events will be a 72-hole format with USGA and R&A rules.

Asked about how quiet players have been about this, he said that all they could do was "provide an opportunity" for players.

He claims the general tone for this venture is "excitement".