Jordan Spieth: CBS graphic shows how far he "would have tumbled to his death"

Golf fans react to CBS' horrifying graphic of what could have happened to Jordan Spieth had things gone wrong after his incredible shot on the par-4 8th at Pebble Beach. 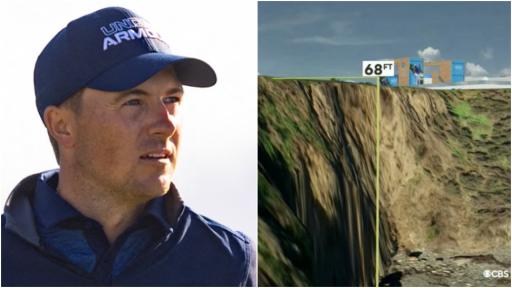 Golf fans have been reacting to the horrifying CBS Sports graphic of what could have happened had things gone wrong for Jordan Spieth with his approach shot into the par-4 8th in round three of the AT&T Pebble Beach Pro-Am.

GOLF Magazine's Dylan Dethier took to Twitter to post an image of the CBS graphic, and golf fans were quick to react to it.

"This is downright terrifying right now."

This shot from Jordan Spieth was quite the situation. pic.twitter.com/sq04R96GXQ

golf fans: we want more stats on broadcasts
CBS: got it, here's exactly how far Jordan Spieth would have tumbled to his death pic.twitter.com/03yxVlt3ju

"Golf fans: we want more stats on broadcasts CBS: got it, here's exactly how far Jordan Spieth would have tumbled to his death," read Dylan's tweet.

Spieth's drive bounded down the fairway and nestled on the edge of the cliff.

As you can see from the CBS graphic, there was a 68 feet drop inches away from him.

and honestly, very useful. props to the graphics team!

I was soooo shook watching it live.

Can we not get a computer generated simulation of what his body would have done as he tumbled to his death?

Despite his caddie Michael Greller telling him to seriously consider whether to take it on, Spieth stepped in without a minimum of fuss and played a miraculous shot over the back of the green, while instantly running back away to safety.

Spieth then played a delightful chip to inside of 20 feet and then buried the putt for one of the greatest par saves of his PGA Tour career.

It would also contribute to a superb 9-under 63 to vault him into contention for the title in the final round.

After the round, Spieth did admit to regretting the shot, especially after seeing the drone footage - READ MORE HERE

Spieth moved to the front of the leaderboard in the final round but unfortunately was pipped to the winning post by US compatriot Tom Hoge, who landed his maiden PGA Tour title.