Justin Thomas and Rocco Mediate both rocked joggers playing professional golf this week. This is how our readers reacted. 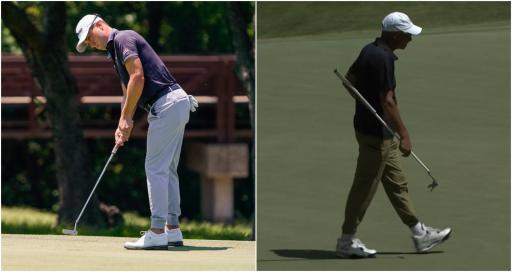 Justin Thomas and Rocco Mediate both wore the same style joggers for their respective recent professional tournaments, though the reaction to their choice of clothing was completely different for GolfMagic readers.

Thomas is known for his sense of fashion. It is extremely important to him and he is always sharply dressed when he plays in PGA Tour events and in the majors. At the 86th Masters, Thomas paid tribute to the late Arnold Palmer with a blue polo and pair of yellow trousers on Sunday.

The 29-year-old is now sponsored by Greyson Clothiers after ending his sponsorship deal with Ralph Lauren following his use of a homophobic slur after missing a putt at the Sentry Tournament of Champions. Thomas apologized.

This week, Thomas is playing the AT&T Byron Nelson. Thomas found himself at T-11 after shooting a 4-under 68 in the first round. He opted for a pair ash grey joggers with a pair of white FootJoy golf shoes and a light blue top.

On the PGA Tour champions, Rocco Mediate, 59, who famously lost to Tiger Woods in an 18-hole playoff at Torrey Pines at the 2008 U.S. Open, also opted for a similar style whilst playing the Regions Tradition.

Rocco Mediate is wearing "how do you do fellow kids?" on the senior tour today. pic.twitter.com/z1Ez5kjsRH

Here's what GolfMagic readers thought of who wore it better:

"Should be thrown off the course"

"They are so lame"

"Loosks like their trousers have had a row with their ankles"

"Shouldn't be allowed on the course. Hideous looking. Although I hope shorts will be allowed before it's over"

Read more stories about the PGA Tour from GolfMagic...