Bryson DeChambeau will undergo surgery on his injured left hand and could be a doubt for two majors. 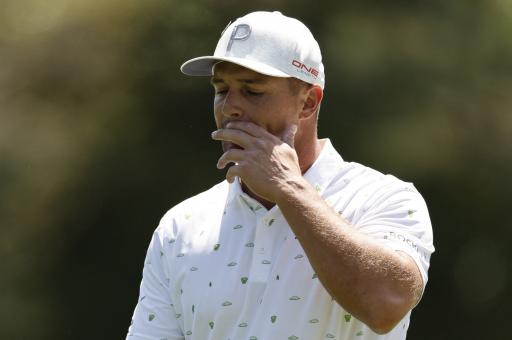 Bryson DeChambeau will have surgery on his injured left hand, his agent Brett Falkoff has confirmed.

DeChambeau, 28, defied doctors' orders to play the Masters where he gave a detailed explanation of some of his injury troubles this year.

It's the hip and wrist that have been causing DeChambeau issues. He has suffered a torn left hip labrum and a hairline fracture in his left hand.

DeChambeau told reporters at Augusta National that it was two years ago that he hurt his hip as he began his quest for more power, speed and distance.

But he aggravated that injury at the Saudi International earlier in the year during a ping pong match against Sergio Garcia and Joaquin Niemann.

He heard something "pop" after he slipped over on the marble floors. DeChambeau summed up the moment: "I Charlie Brown'd myself".

DeChambeau added: "And [I] went horizontal and then hit my left hip and my hand at the same time, and that really just took me out.

"That's really when it just got to the point where I couldn't even grip the golf club.

"I tried to play that week, and it was impossible.

"I was not even gripping with my left hand that week. I was like, this is dumb, I have to go take care of my body first and get it right."

His agent told Golf Digest: "Bryson will undergo surgery on his hamate bone in his left hand.

"We look forward to a smooth recovery and rehab process. Bryson looks forward to returning as soon as he is cleared to do so."

DeChambeau returned from injury at the WGC Match Play where he was eliminated in the first round.

A week later at the Valero Texas Open he missed the cut by a margin of six strokes. At the Masters, he shot 76-80 to miss cut the cut.

It has been reported that DeChambeau will be out of action for 10-12 weeks, casting doubt on whether he will be able to participate at the PGA Championship in May and the U.S. Open.