Kuch on Erik van Rooyen: "He's got nice ankles, I see those every week!" 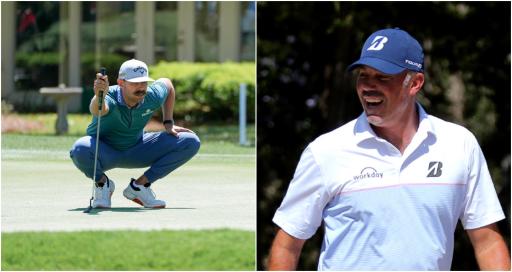 Erik van Rooyen debuted his moustache at the Sentry Tournament of Champions and revealed growing it was a holiday tradition.

His grandfather had a moustache his whole life and van Rooyen always likes to have one for the Christmas holidays.

The South African has revealed that his wife is not a fan but "people seem to like it" and therefore it has stuck around a little longer.

His pristinely kept 'stache was on display at Augusta National for the Masters and it was still on his lip at RBC Heritage on the PGA Tour.

The 32-year-old forced himself into contention ahead of moving day at Harbour Town Golf Links and was only three off the lead.

In his post-round press conference, he was asked about his grooming process. He uses pomade wax in his "morning routine", he said.

He said: "[There is] definitely no branding intent there, but my grandfather had a moustache his whole life.

"I used to do it for Christmas, and this one kind of stuck around for a little while. People seem to like it."

He added: "My wife dislikes it. So there's definitely a shelf life to this thing, but who knows when that will be.

Van Rooyen, for a while now, has also been a fan of wearing ankle-bearing joggers.

He shot an opening round of 68 at The Open in 2019 but the real topic of conversation was his choice of clothing.

"I think that's kind of fading away now," van Rooyen said of comments about his trousers.

"People hopefully are getting used to it. The opinions are all across the board.

"Similar with the mustache, definitely a lot more positive vibes right off the bat. Yeah, people like it."

More: How much Ted Scott has won on the bag for Scheffler

Also in contention in the tournament, Matt Kuchar was asked about what he thought about the South African:

Q. Completely out of left field, and I know you didn't play with him today, but any opinions on Erik van Rooyen's mustache?

"I have not seen it," said Kuch. He added: "He's got nice ankles though. I see those every week."

How does van Rooyen feel that Kuchar is a fan of his ankles?

He joked: "Yeah, he mentioned something to me at the British Open one year as well. Yeah, no comment."