Wouldn't it be great if this was their actual conversation... 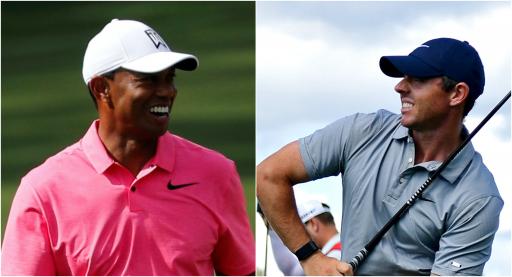 As we saw at the weekend, Rory McIlroy showed his passion for golf as he was pictured with his shirt torn to pieces after he finished tied sixth at the DP World Tour Championship.

The four-time major champion made three bogeys in his final four holes. Collin Morikawa went on to win the tournament and became the first American to win the Race to Dubai.

It was a heated afternoon in the Middle East for more reasons than one and McIlroy took his anger out on his t-shirt following the disappointing end to the tournament.

A lot of golf fans have tried to make light of the situation and forethetour tried to provide a funny side to things by creating a text conversation between the Northern Irishman and his legendary friend Tiger Woods.

As we all know by now, Woods is well down the comeback trail and he caused a flurry of excitement by posting a video of himself hitting balls on the driving range.

Well according to this message conversation, McIlroy asked Woods to post the video to take some attention away from the image of his ripped shirt.

Quite comically, Woods says in the messages that he is going to beat McIlroy to the green jacket when The Masters comes round. This is the only missing link to McIlroy's career grand slam.

Although we are well aware that this conversation has been made for entertainment, we are all counting down the days until Woods is back on the PGA Tour.

It would be hard to eclipse his achievement from the 2019 Masters where he won his 15th major title, but it really would be the comeback of all comebacks if the 45-year-old picked up his sixth Masters win next year.