Lexi Thompson honoured to be alongside Bubba Watson at QBE Shootout

Lexi Thompson is playing in her fifth QBE Shootout in six years and she will pair up with Bubba Watson at this year's event. 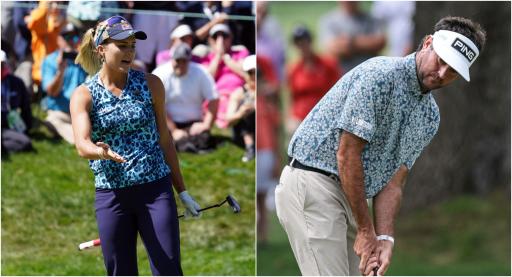 Lexi Thompson is "honoured" to be playing alongside two-time Masters champion Bubba Watson in the QBE Shootout this week.

The 26-year-old got to know Watson at the Solheim Cup. He was a special guest in the dressing room for US captain Pat Hurst's side and Thompson described the surprising but great experience that it brought for the players.

"It was amazing. It was very shocking to have Bubba Watson there. They said a surprise guest and I’m like, ‘All right, wow, that’s not who I expected'," said Thompson on Wednesday at the QBE Shootout.

RELATED: RORY MCILROY: GOLFMAGIC READERS VOTE ON WHICH MAJOR HE WILL WIN NEXT

"To have him there alongside us, supporting us, giving us advice whenever we needed it, it was truly amazing.

"We weren’t expecting it at all, but just to have the support there that week, that week’s so intense, and to have somebody like Bubba out there supporting us and helping us out along the way, there’s nothing like it."

Although Europe won the cup on away soil by a score of 15-13, Watson did all he could to rally the troops. Now, Thompson will team up with the 12-time PGA Tour winner for a 54-hole event made up of the scramble, greensomes and better-ball formats.

Watson did not reach the Tour Championship in 2021 and so he took some time off and also split up with his caddie Ted Scott. He will have Gabe Sauer on the bag this week in Florida.

Having taken some time to spend with his family and his wife Angie, Watson admitted he may not have his best golf this week, but was relieved that he has a trusty partner with him.

RELATED: TIGER WOODS: HOW TO WATCH HIS RETURN TO GOLF AT PNC CHAMPIONSHIP WITH CHARLIE

"Started practising a couple of weeks ago, so looking forward to it. There might be some loose shots somewhere, but that’s why I have a good partner," Watson said.

Thompson, the winner of the 2014 ANA Inspiration and 11 LPGA Tour events, reciprocated Watson's excitement for the QBE Shootout. Could they be the pair to take down the record-seeking pair of Harris English and Matt Kuchar?

"I’ve never actually seen him play in person, so I’m just happy to be here and honoured that I got the invite back."