Tiger Woods: How to watch his return to golf at PNC Championship with Charlie

A comprehensive guide to watching Woods' return to the game, nine months after his car crash. 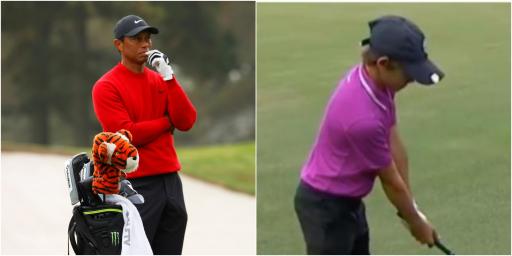 Tiger Woods will make his return to golf next week at the PNC Championship alongside his son Charlie.

Woods played last year at the tournament and it was incredible to see little Charlie display all the mannerisms (without knowing) of his father.

Remember that time he ripped a fairway wood onto the green and walked two steps, paused, then carried on just as Tiger did the same?

You absolutely love to see it. Woods has not played on television since before he crashed his luxury SUV in February.

His return to the golf world - even in this capacity in a "hit and giggle" - is a statement of intent. Woods is trying to mean business again.

At what point that is, we do not know. But watching Woods again, on TV, playing golf will be a sight all golf fans have looked forward to.

The PNC Championship will be played over on 18-19 December at the Ritz-Carlton Golf Club in Orlando Florida.

How can I watch Tiger Woods on TV?

From 4pm on Sky Sports Golf

From 4pm on Sky Sports Golf

What is the field?