Jay Haas has broken Sam Snead's record of being the oldest player to make a cut on the PGA Tour. 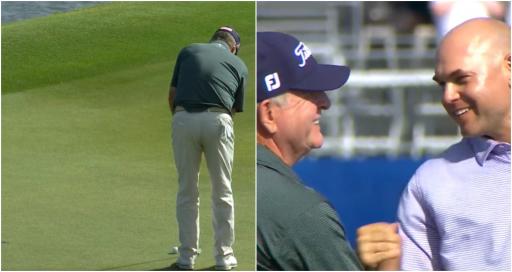 As far as milestones go this one is pretty special. Jay Haas has become the oldest player in history to make a PGA Tour cut.

At the age of 68, Haas made the cut on the number alongside his 39-year-old son Bill at the Zurich Classic of New Orleans.

It was his 799th start on the circuit and the pair had to survive late drama to make it to the weekend.

At 9-under pair the pair were one shot better than the projected cut but Bill sent an errant tee shot into the lake at the par-3 17th.

Up stepped Haas senior to make the gutsy bogey putt. And at the par-5 18th, he needed to show some metal again to make it to the weekend.

Haas senior has undoubtedly seen a lot on the golf course. He's experienced a lot, too. He's won nine times on the PGA Tour.

He's also won 19 times on PGA Tour Champions but that putt at the last at TPC Louisiana was as nervous as he had ever been, he said.

Haas was asked how many putts he's stood over like that in his lifetime.

He said: "Way too many. I know that. That was probably as nervous as I've ever been over a putt of that length certainly.

"It sounds silly just to have a chance to make the cut. However, there's a lot of circumstances here that it kind of made it doubly important in my mind.

"Again, we were right there. We had a big -- not a big cushion but a cushion, and it didn't feel like we had it made by any means, but to somehow shake that putt in on the last hole was something I'll never forget.

"But just the whole week, playing with Bill, getting texts from all my kids, it's just been a real charge."

Haas now takes the mantle from Sam Snead, who was previously the oldest player to make a PGA Tour cut.