Patrick Cantlay was in good spirits after round two at the Zurich Classic as Jay Haas, 68, finished on the projected cut line with his son. 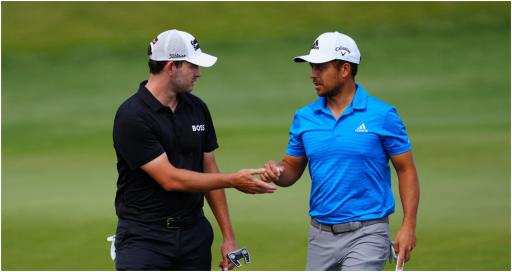 Patrick Cantlay says he has felt "good vibes all week" with Xander Schauffele as they extended their lead at the Zurich Classic of New Orleans on the PGA Tour.

Cantlay and Schauffele fired a blistering 13-under par 59 at TPC Louisiana at the only team event of the tour schedule on day one and followed that with a 4-under 68 with five birdies and one bogey.

They narrowly lead Aaron Rai and David Lipsky and Doc Redman and Sam Ryder going into the third day of play after 18 holes of foursomes.

Australian pairing Jason Day and Jason Scrivener (65) are also in the top-10 and defending champions Marc Leishman and Cameron Smith are also lurking at the top of the leader board.

Billy Horschel and Sam Burns (68) and Max Homa and Talor Gooch (66) were also moving in the right direction on a windy afternoon at the Pete Dye layout.

Cantlay was asked if he and Scauffele had a target score in mind. He said: "No, we didn't. I think we just wanted to hit a bunch of quality golf shots, and we did that today.

"We really fought hard and made a bunch of those mid-range putts, especially in the middle of the round, and that kind of kept the momentum going.

"It's kind of tricky out there with the wind how it is, so I thought we played a nice round today."

Schauffele added: "We've played so much together that we're pretty aware of the dos and don'ts and we've seen it all.

"There's not too much conversation. We kind of got all that out of the way in the past couple years."

Bill Haas during the first round of the Zurich Classic

There was incredible story as Jay Haas, 68, making his 799th official PGA Tour start, finished on the cut line with his 39-year-old son Bill.

They were one stroke better than the projected cut at 9-under par as they got to the 17th but Bill sent his tee shot into the water and they had to make do with a gutsy bogey.

Bill left his father with a testing putt for par at 18 which he duly sank to finish on the projected cut of 8-under after 36 holes.

The oldest player previously to make a cut was Sam Snead in 1979 at the age of 67 years, two months and 23 days old.