PGA Tour pro Nick Watney plays one of the coolest shots you will see all season as he skips his ball across the water from a tough position. 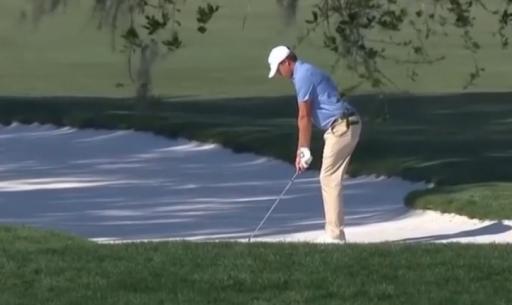 PGA Tour pro Nick Watney played one of the coolest shots of the season so far when skipping his ball across the water at the par-5 16th on day two of the Arnold Palmer Invitational at Bay Hill.

Okay, it might not have been as cool as Jon Rahm's epic water-skipping ace at The Masters, but it was impressive nonetheless especially given he was playing from the fairway bunker.

We'll let you figure that out...

Now Watch: PGA Tour pro LAUNCHES HIS PUTTER IN THE LAKE in epic strop at the Arnold Palmer Invitational

Watney ended up chipping close and holing the putt for a birdie en route to a second-round 72.

Related Articles
PGA Tour: 5 biggest names who lost their Tour cards
PGA Tour pro takes an age over his ball in final round of Wyndham Championship

He has since improved on that in the third round with a solid 69 to move to 1-under par on a tough day of scoring.

The 40-year-old has won five times on the PGA Tour but his last victory dates back to The Barclays in 2012.

He has been struggling for form on the PGA Tour in recent years but he did finish tied second at the Sanderson Farms last year, marking his best finish anywhere around the world since his last PGA Tour victory.