PGA Tour pros Patrick Cantlay and Matthew Fitzpatrick have expressed their displeasure at the scoring system used at the season-ending Tour Championship. 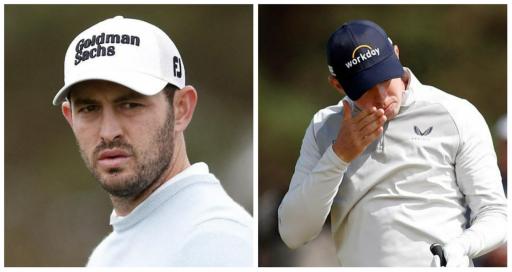 Matthew Fitzpatrick has joined Patrick Cantlay in expressing his frustration at the scoring system used for the $75m Tour Championship.

Cantlay previously expressed his displeasure over the PGA Tour's choice of courses before he defended his title at the BMW Championship last week. Now he's taken aim at the format at East Lake.

In case you didn't know, players in the 30-man field at the season-ending event have their starting scores relative to their FedEx Cup ranking.

That means that the leader, Scottie Scheffler, will be starting at 10-under par whilst the lowest-ranked players K.H. Lee, J.T. Poston, Sahith Theegala, Adam Scott and Adam Wise will begin at level par.

It is a system that has often been criticised.

Fitzpatrick told the media: "I have never played anything like it. The guy that finished sixth [Cameron Smith] is only one shot ahead of me [which] I think is probably a little bit unfair. I feel like he probably should be more."

The reigning U.S. Open champion also wasn't a fan of the fact that winners of the St. Jude Championship and BMW Championship in the past fortnight have earned 2,000 points.

It meant that Will Zalatoris vaulted up to second in the standings, only 124 points behind the leader compared to Scheffler's four victories.

Winning a major is worth 600 points, whereas winning a regular PGA Tour event earns a player 500.

Zalatoris has since had to withdraw from the Tour Championship with two herniated discs. He's also missing the Presidents Cup.

Fitzpatrick added: "I just think that the points in these last [events], it's just a little bit too much.

"I gave the example of Collin Morikawa last year going into the play-offs second or whatever he was, had a phenomenal season, and I actually spoke to him about it last week, and he defended it [finishing 26th after the play-offs]. He's got more class than me, I guess. I'd be fuming if I was him.

"I did have a thought that somehow the play-offs could be match play somehow where it's a bit more realistic to every other sports play-offs if that's the way the Tour want to go.

"But yeah, I just think the heavy points for these last three is a little strange."

Fitzpatrick has suggested match play might be a better alternative.

Patrick Cantlay, who is trying to defend his FedEx Cup crown, is in agreement with Fitzpatrick.

Cantlay, 30, said: "Yeah, I've talked before about it. I'm not a fan. I think there's got to be a better system, although frankly I don't know what that better system is.

He added: "I've never had the low aggregate score here. In fact, I've played pretty poorly here in general other than last year."