PGA Tour pro Bob MacIntyre wasn't a fan of this shot at the Zurich Classic but moments later he was getting high fives. 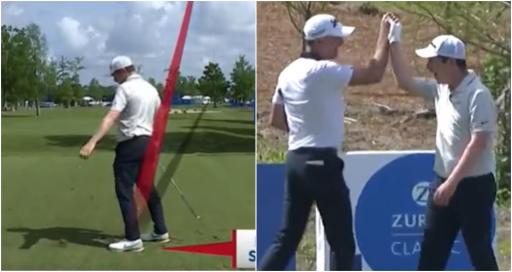 PGA Tour pro Bob MacIntyre was absolutely disgusted with this tee shot. He hated it so much he turned away and reflected in quiet disappointment.

But when he looked back, it was an ace. How about that, huh?! MacIntyre was playing in the first round of the Zurich Classic of New Orleans when he took aim at the par-3 14th hole at TPC Louisiana.

As you can see, the Scot, 25, is setting up for one of his classic peelers. He was just trying to caress it in there with a gentle fade. But the contact sounded a bit heavy for his liking. And it was.

His golf ball landed short of the pin and MacIntyre was looking at the dirt and thinking about ironing the issue out over his next swing. A few bounces and hops later and his ball was tracking...straight in!

I can confirm I thought it was going to be 15/20 feet but we will take that @PinhighMike https://t.co/Pb62eRuRqF

MacIntyre is playing alongside Scotland's Martin Laird. The pair combined to shoot 6-under in the only team event on the PGA Tour schedule to sit in T-46 after round one. Aussie duo Cameron Smith and Marc Leishman are the defending champions.

By day's end it was Patrick Cantlay and Xander Schauffele, using experience drawn from their Ryder Cup and Presidents Cup appearances to stand alone atop the leaderboard with a stunning 13-under par 59. It was the first time ever a team had recorded that score in PGA Tour history.

Still, perhaps this was a contender for shot of the day from MacIntyre. He confirmed later that he thought the ball was going to be about 15 to 20 feet short. "But we'll take it," he wrote.