PGA Tour rookie in car accident: "Slammed on the brakes and smoked me"

PGA Tour rookie David Lipsky said he is okay but the collision meant he had a "hectic" start to his week. 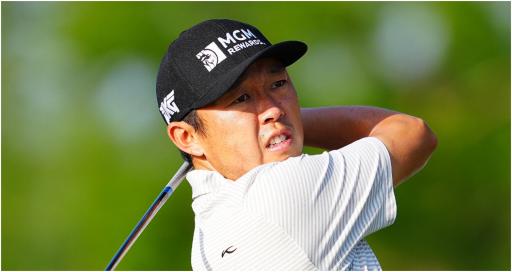 PGA Tour pro David Lipsky has revealed he was involved in a car accident before the first round of the Zurich Classic of New Orleans.

And judging by the picture, he is more than a little fortunate that he wasn't hurt. Lipsky also said he thinks the other two involved were okay, too.

Lipsky, 33, is a PGA Tour rookie and has teamed up with England's Aaron Rai and actually held the clubhouse lead briefly in round one with an 11-under opener.

He said he was changing lanes to avoid a car in front of him that was broken down on his way to his practice round when he was hit from behind. "Smoked me," Lipsky said.

Lipsky said of the smash: "Yeah, I'm fine. Yeah, I was driving here on Tuesday morning, and there was a car right in front of me that had broke down, so I started changing lanes, and the guy behind me, I guess, wasn't paying attention and slammed on the brakes and smoked me.

"I'm all right. I think the other two drivers were fine. Yeah, it was a little bit of a hectic beginning to the week."

Hectic is a little bit of an understatement. GolfChannel's Rex Hoggard has a snap of Lipsky's vehicle and the American wasn't kidding when he said he was smoked.

Your @Zurich_Classic co-leader David Lipsky, who is teaming with Aaron Rai, already had an eventful week. He was involved in a car crash on Tuesday heading to the course. He said no one was hurt in the accident. pic.twitter.com/EobINlcQ4B

Still, he didn't want to dwell too much on it. And the heart-in-mouth moment did not deter him from helping the team make a blistering start. They made nine birdies and an eagle.

That eagle even came at the par-4 eighth hole. Lipsky dunked one from 113 yards.

He said: "I think we have a pretty good understanding of each other's games, and we sort of mapped out how we're going to try to approach it tomorrow.

"I think our comfort level with each other's games and with the course will increase more and more as the week goes on."

Patrick Cantlay and Xander Schauffele held the lead after 18 holes after shooting a combined 13-under par 59.