Chris DiMarco told a great story on the PGA Tour Champions about Tiger Woods when they were battling it out at The Masters in 2005. 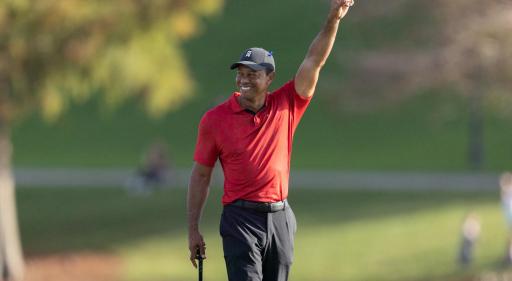 Tiger Woods is known as the ultimate competitor and this has culminated in 15 major championship victories and 82 wins on the PGA Tour.

But in the heat of battle, Woods can come back down to earth and show relaxation and even a bit of humour. Chris DiMarco provided key evidence of this with one great story.

Related: PGA Tour gets hired and then immediately FIRED!

The three-time PGA Tour champion once told a story to the camera on the PGA Tour Champions of a little joke he shared with Woods at The Masters in 2005.

DiMarco set the scene of him and Woods hitting balls at Augusta National and preparing to go out in the final group. That Sunday proved to be one of the great Sundays in major championship history.

Classic Tiger Woods story. @ChrisDiMarco has the golf ball to prove it. pic.twitter.com/PDx8I4drGU

"The Gators had won a national championship in basketball that year, so he was about 50 yards down and I chipped a little ball down there and wrote 'Go Gators' on it.

"Perfect little chip that goes right into his bucket. I see him take it, picks it up, looks at it, takes his sharpie out, scratches and chips it back down to me.

"I pick up the ball and he scratched out 'Go' and he wrote, 'F the Gators'. I still have that ball."

This was a great moment for DiMarco, however, he was on the end of some bad luck and one of the most iconic shots in golf history that week.

He battled Woods and although he began the final round three shots behind him, he cut the deficit to one shot with three holes to go. But then Woods holed a stunning chip shot from the back of the 16th hole to raise the roof.

Despite this setback, Woods bogeyed the final two holes and DiMarco forced a playoff. Being the incredible champion he is, Woods made a birdie to win his fourth Green Jacket and his ninth major title.