Tiger Woods was filmed without wearing a protective sleeve on his right leg as he arrived for his World Golf Hall of Fame Induction. 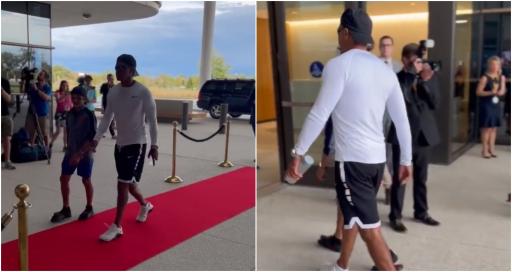 Tiger Woods was filmed without wearing a protective sleeve on his badly damaged right leg for the first time since his car crash.

Woods crashed his luxury SUV in February 2021 and later revealed that it was 50/50 whether he would keep the limb.

The 46-year-old 15-time major champion had to be extricated from his vehicle and golf fans feared his career was over.

Despite three weeks in a hospital and several months at home, he has confirmed he will make another comeback.

He memorably teed it up last December for the first time since that crash with son Charlie at a father/son jaunt at the PNC Championship.

What followed was speculation on where he would make his comeback. He has tentatively targeted playing the 150th Open this summer.

Woods was filmed arriving at the World Golf Hall of Fame with son Charlie by his side without the sleeve he previously wore.

The damaged limb looked in good condition and there were no obvious signs of scarring.

It needed rods, screws and pins in it to repair the damage. Cops feared they were arriving on the scene of a fatal car crash.

Woods ditched his outfit for a smart blue suit ahead of the ceremony.

Woods was due to be inducted by his daughter Samantha alongside former PGA Tour commissioner Tim Finchem, four-time major winner Susie Maxwell and course developer and architect Marion Hollins.

More: A history of Tiger's feud with Sergio Garcia

Next page: The inside joke that riled up Tiger