Golf fans have been left a little confused by Matt Jones' putting drill at the Honda Classic. 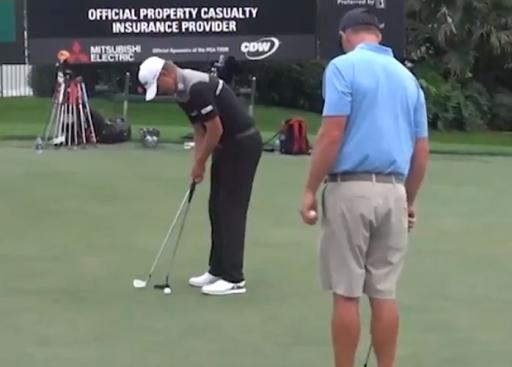 The PGA Tour posted a video of Matt Jones' bizarre putting drill at the Honda Classic that supposedly gives him more feel with the flat stick, but it's left golf fans feeling a little confused.

It's safe to say that most golf fans watched the video with a puzzled look on their face (myself included), wondering how on earth this drill can help with your putting.

That being said, the drill clearly helps Jones, a player who has struggled on the greens in the past, as he put together an impressive performance with the putter in hand throughout the week at PGA National, where he went on to win the Honda Classic by five strokes.

WATCH JONES' UNIQUE PUTTING DRILL IN THE VIDEO BELOW:

"Here's a new putting drill," read the caption in the video from the PGA Tour. "Matt Jones is a great chipper, but he wants to improve his putting. So he does this to get the feel from his irons to translate over to his putter."

Jones ended his seven-year wait for his second PGA Tour title and putting is definitely an area that he hasn't been able to master.

Even though he cruised to victory at PGA National, Jones ranked 25th in Strokes Gained Putting, so there is still work to be done, although golf fans aren't convinced that this drill is the way to do so.

"I feel like if you wanna get good at putting you should generally just putt more?" said one golf fan on Instagram.

"Stupidest thing I've ever seen in my life," said another on Twitter.