Collin Morikawa and Katherine Zhu posted pictures of their wedding on Monday ahead of the American's participation at the Hero World Challenge. 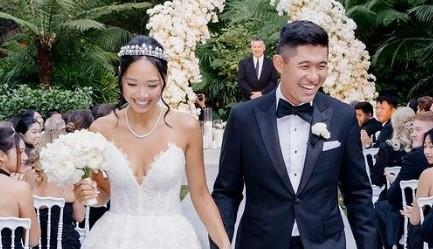 November has proven to be a special month for Collin Morikawa and his new wife Katherine Zhu. Just under a year ago, they became engaged and now, they are married.

On Monday evening, the new Morikawa pair posted their wedding pictures on social media in which their dog Koa seemed to enjoy the day as much as the happy couple.

On November 30 last year, Morikawa and Zhu announced their engagement and just short of a full 365 days later, they are now husband and wife. They have been together for five and a half years to this point.

Morikawa, 25, wasn't able to defend his title at the DP World Tour Championship in Dubai two weeks ago due to "some upcoming personal commitments." It would appear now he was preparing for his wedding.

Many figures from the golf world posted their congratulations to Mr and Mrs Morikawa such as Tony Finau, Max Homa, Sahith Theegala, Danielle Kang, Morgan Pressel and Jessica Korda.

The World No.10 is one of many stars from the PGA Tour in the field for this week at the Hero World Challenge. From a luxurious wedding to Albany Golf Course in the Bahamas. Not bad, eh?

Unfortunately, Morikawa and his peers won't have the chance to share the fairways with 15-time major champion and tournament host Tiger Woods as he has now withdrawn from the event.

Woods reported to his fans that he'd developed plantar fasciitis in his right foot, but he still intends to play in The Match on December 10 and the PNC Championship which begins on December 15.

Morikawa squandered the chance to become World No.1 at this event in 2021 as he surrendered the title to his Ryder Cup singles opponent Viktor Hovland.

Perhaps with a happy mindset off the back of his wedding, Morikawa could pick up his first win since The Open Championship 17 months ago.