Tiger Woods on Rory McIlroy: "People have no idea how hard that is to do..."

Tiger Woods complimented the leadership skills of Rory McIlroy and the outspoken stance he has taken for the PGA Tour and against the LIV Golf Series. 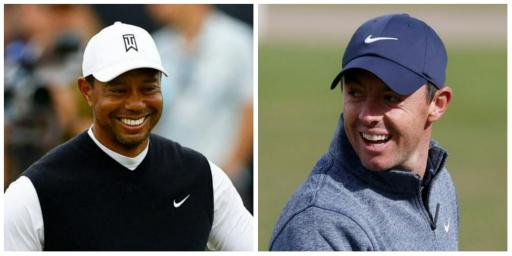 Speaking ahead of the Hero World Challenge in the Bahamas, Woods described McIlroy as a "great leader" for his role involving the significant changes that were made to the PGA Tour for the 2023 season.

The pair have been vital in masterminding a revamped schedule which aimed to secure the futures of the best players in the world with increased prize purses and more rewards for the most recognisable players, using initiatives such as the Player Impact Program and a minimum earnings base.

Since the first LIV Golf event was played at the beginning of June, McIlroy has juggled diplomatic and playing duties to perfection. He's won the CJ Cup, the RBC Canadian Open and the Tour Championship since the inception of LIV and this is what impresses Woods the most.

"What Rory has said and done are what leaders do. Rory is a true leader out here on Tour
"The fact that he's actually able to get the things he said out in the public eye, be so clear-minded with it and so eloquent with it, meanwhile go out there and win golf tournaments on top of that, people have no idea how hard that is to do, to be able to separate those two things.
"But he's been fantastic. He's a great leader in our calls we make and he's a great leader with all the players out here. Everyone respects him and they respect him because not just his ball-striking, his driving, but the person he is.
"I don't know whether it's going to be me, Rory or the Tour or other players being - I wouldn't necessarily say a peacemaker, but I just think that there's a window, I think, of opportunity for us from both tours to figure this out shortly."

"But I think that window's closing just because the majors are coming up now and they're going to have their own criteria for the majors.
"But if they can do it quickly before that, but again, that goes back to LIV and their lawsuit. They're suing us first and we countersued them, so they have to back off the table, they will back off the table and then we'll have a place to talk. But their leadership has to change as well. If that doesn't, then I think it's going to continue to go down the path that it's going right now."

Woods agreed with McIlroy's comments from the DP World Tour Championship which called for Greg Norman to step aside from his role as CEO of LIV Golf.

The Northern Irishman and the Australian became verbal sparring partners in 2022, most significantly when McIlroy surpassed Norman's PGA Tour trophy tally in Canada in June.

In terms of leadership, Woods doesn't believe the LIV Golf Series and the PGA Tour can co-exist with the two-time Open champion in his current position with the Saudi-financed league.

The host of this week's limited-field event announced on Monday that he can no longer play in Albany due to developing plantar fasciitis in his right foot. Woods still plans on playing in The Match - which Phil Mickelson has been booted out of - and the PNC Championship in December.