Jon Rahm was asked about Phil Mickelson's comments about the PGA Tour and this is what he had to say. 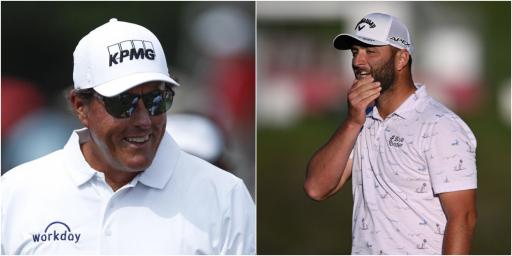 Jon Rahm refused to be drawn into the controversy in the wake of Phil Mickelson's controversial comments about the PGA Tour.

The world number one heads into the WM Phoenix Open this week as the betting favourite in a very strong field.

A huge topic of conversation lately has been the influence of Saudi money in the game and a potential rival league being set-up in the future.

As the current best player in the world, Rahm's voice is heard. Mickelson last week explained in detail his current gripes with tour bosses.

When asked about Mickelson, the Spaniard insisted he's just here to play golf - yet he doesn't agree with everything Lefty said.

"Listen, I try to stay away from those things. I'm here to play golf, and that's about it. Phil has been on Tour for a very long time, and I'm not here to judge anybody, right? Phil said what he said. That's it.

"He's still a great friend of mine. I don't know why he said what he said or why he said how he said it, but all I can say is I support him as a friend, yet I don't agree with everything he said. I'm 27 years old. I can count myself pretty lucky to be where I'm at in life."

In this calendar year, Rahm has made three starts and finished in the top three in two events.

Rahm took an extended break last October to spend more time with his young family after an exhausting year where he won his maiden major and a tough Ryder Cup.

That decision - it appears - has paid dividends with Rahm's mental state to the point he is now "refreshed enough" to have competitive stamina.

"You know, I'm comfortable. I think one of the best decisions I have made in my life was taking those two-and-a-half months off at the end of the year.

"I wouldn't be surprised if it's something I do more often, because with how hectic our year can be, how much effort we put into this, to have some time to just be home and enjoy the time off is great.

"This is probably one of the reasons why I have started playing so good.

"Even though my game didn't feel at its best, I feel like I'm refreshed enough and we can call it, say, competitive stamina.

"It's high enough to where I can actually pull it through and finish strong. Shoot 33-under on a golf course where in the past I struggled putting at.

"Clearly I didn't struggle putting. Finished in second at Torrey when I definitely didn't have my best ball-striking week, which is supposed to be a ball striker's course.

"So, yeah, I'm playing good golf and hopefully starting this week things start clicking a little bit better. Like I said, hopefully I end up on top this week."

Rahm has now reached point where you just expect big things. You expect him to be in contention. Fighting it out for the win. Mounting a late charge.

He was asked if he feels disappointed if he finishes inside the top-10.

"It would be a very sad golfer's life if any time I finish in the top 10 it's a disappointment. We are in a sport unfortunately where the winningest player in history won, what, 30 per cent of the time, so we lose most of the time.

"You can't take every week you don't win as a disappointment. If I'm finishing in the top 10, I can't say it's a bad week. It all depends how it happens, but there is always something you can call an achievement in a week where you finish out there.

"Plus I do make it a point to be consistent. I have mentioned that before. If I don't win, I want to finish as high as possible. It matters to me.

"I'm never going to give up no matter what point I am on the round or on the tournament. I'm a competitor. I'm going to try my hardest on every shot. If I can finish one higher, it makes a difference to me."