Phil Mickelson is auctioning off the Scotty Cameron putter he used to claim his 21st PGA Tour victory at the 2002 Canon Greater Hartford Open. 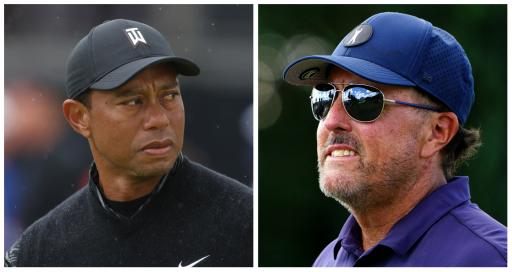 Tiger Woods is not the only person auctioning some memorabilia, as Phil Mickelson has confirmed he is putting the Scotty Cameron he used to claim his 21st PGA Tour victory up for sale.

It was the first time the 15-time major champion had teed it up at Augusta National following the revelations about his private life.

As for Lefty, he has recorded a short video talking about the flat stick to confirm its authenticity.

Mickelson - who has been booted out of The Match franchise because of his association with LIV Golf - said of the putters:

They certainly look pretty cool. Mickelson's putters are unlikely to eclipse the money paid for a set of irons Woods used during his Tiger Slam era.

Before Mickelson was suspended by the PGA Tour for joining the LIV Golf League, he had won 45 PGA Tour events.

We are expecting to see more changes to Mickelson's bag in 2023.

Mickelson has been filmed this year tinkering with lots of different pieces of equipment.

At LIV Golf's Invitational in Portland, he was spotted using this Armlock putter.

Mickelson's deal with Callaway is still on pause. The OEM put their long-term partnership on hold following his famously controversial remarks about working with Saudi Arabia.

At the time, the a spokesman for Callaway said:

"Callaway does not condone Phil Mickelson's comments and we were very disappointed in his choice of words - they in no way reflect our values or what we stand for as a company.
"Phil has since apologised and we know he regrets how he handled recent events. We recognise his desire to take some time away from the game and respect that decision. At this time, we have agreed to pause our partnership and will re-evaluate our ongoing relationship at a later date."