Phil Mickelson has been axed from involvement in The Match, due to the six-time major champion's involvement with LIV Golf. 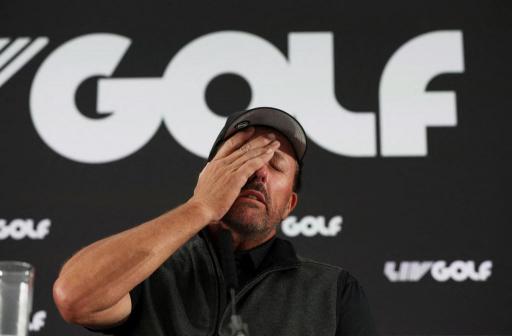 Much like LIV Golf, Phil Mickelson was one of the masterminds of The Match, but lefty is no longer affiliated with the franchise.

This is according a report by Sports Illustrated, who have spoken to the creator and producer Bryan Zuriff.

In a statement to the publication, he said:

"Phil was a phenomenal partner and he helped build this thing. He was really good in this show. But he chose an opportunity and has taken a different path. Our show lives on because people like it."

"Look, we're in business with the PGA Tour. We're basically a PGA Tour event. Maybe one day, LIV will figure out their stuff. Then I'll work with whomever is appropriate."

Mickelson took part in the first iteration of the series in 2018 when he faced Tiger Woods.

The 15-time major champion has also just confirmed he will play the 2022 PNC Championship with son Charlie Woods.

In the lead up to that first Match, Mickelson was criticised for posing alongside bundles of cash. He beat Tiger over 22 holes.

Mickelson has featured in every iteration of The Match in some capacity.

In his most recent appearance he teamed up with Tom Brady, facing off against Bryson DeChambeau and Aaron Rodgers.

Mickelson was in the commentary booth for DeChambeau's match against Brooks Koepka.

In February, Mickelson was critical of the PGA Tour and the issue of media rights.

The six-time major champion accused the PGA Tour of being "obnoxiously greedy" in this regard.

"There are many issues, but that is one of the biggest. For me personally, it's not enough that they are sitting on hundreds of millions of digital moments. They also have access to my shots, access I do not have. They also charge companies to use shots I have hit. And when I did 'The Match'—there have been five of them—the tour forced me to pay them $1m each time. For my own media rights. That type of greed is, to me, beyond obnoxious.”

The next instalment of The Match will take place on 10 December.

The aforementioned Woods and Rory McIlroy will be facing Justin Thomas and Jordan Spieth at Pelican Golf Club in Florida.

The Match will be played over 12 holes.

Here is everything you need to know.

Next page: Judge rules Mickelson can still be deposed in antitrust case