The Match: What YOU need to know about Tiger and Rory's duel with JT and Spieth

It's been confirmed that Tiger Woods and Rory McIlroy will take on Jordan Spieth and Justin Thomas in the seventh edition of The Match. 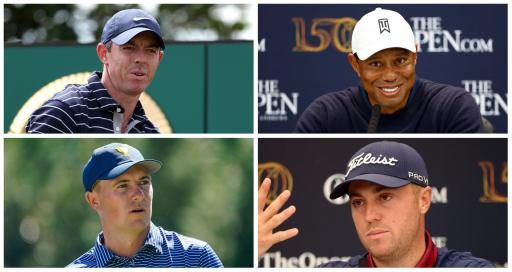 Golf fans are set to be treated to the most mouth-watering edition of The Match in December when Tiger Woods and Rory McIlroy face off against the all-American duo of Justin Thomas and Jordan Spieth.

This will be the seventh edition of The Match which was first played on November 23, 2018, when Woods took on Phil Mickelson at Shadow Creek Golf Course in Nevada.

Much has happened in the lives of both men since then, but The Match has carried on and in its four-year existence, the fixture has raised more than $30m for charity.

The latest iteration of The Match will take place at Florida's Pelican Golf Club and will be played over 12 holes on 10 December.

The popular new feature in the world of golf has often crossed over into the NBA and the NFL with different stars often showing off their skills against stars of the PGA Tour, and now the LIV Golf Series.

@JordanSpieth looks like we got some competition! Looking forward to a fun match under the lights against @TigerWoods and @McIlroyRory while we raise money for Hurricane Ian relief. Mental prep for the FedEx Cup and major championship jokes starts now! pic.twitter.com/5TthhjDusR

A brief history of The Match

Woods and Mickelson faced off in the first match which took 22 holes to decide a winner. It was Mickelson who finally claimed victory and banked $9m.

Both legends returned for the rematch but respectively teamed up with Peyton Manning and Tom Brady at Medalist Golf Club in Florida. Woods claimed his revenge alongside the former quarterback of the Indianapolis Colts and the Denver Broncos.

Steph Curry became one of two figures from the basketball world to tee it up in the third edition of The Match at Stone Canyon in Arizona. Playing with Manning, they lost to Mickelson and NBA icon Charles Barkley.

The fourth renewal saw the debut of Bryson DeChambeau. He teamed up with Green Bay Packers quarterback Aaron Rodgers to beat Mickelson and Brady.

DeChambeau then tasted defeat against his old verbal sparring partner Brooks Koepka in 'Bryson vs Brooks'. The four-time major champion was in the zone in Paradise, Nevada, beating his fellow LIV Golfer 5&3.

The last edition of The Match was an all-NFL affair as Brady and Rodgers won 1UP against Josh Allen and Patrick Mahomes at Wynn Golf Club, the same venue as Match No.5.

Why are Tiger Woods and Rory McIlroy playing against Jordan Spieth and Justin Thomas?

There is usually no rhyme or reason for the match-ups that take place in The Match, but the current landscape of the PGA Tour and the interpersonal relationships that exist within can help us to explain.

At the past champions event before The 150th Open Championship, Woods and McIlroy were in the same group alongside six-time major champion Lee Trevino and Georgia Hall.

The pair waved to McIlroy's wife and daughter in the crowd. This was one of the first public examples of the pair's friendship and this bond has produced TMRW Sports, a company set to bring Monday Night Golf to your screens in 2024.

The pair also led a crunch meeting ahead of the BMW Championship in August where a number of players hashed out the changes that have been made to the 2023 PGA Tour schedule.

As for their opposition, Justin Thomas is one of Woods' closest friends. The 15-time major champion has previously described Thomas as the younger brother he never had, and the older brother that his son Charlie never had.

They practice together at major championships and they will likely tee it up in the same group at the PNC Championship. Thomas is also best friends with Jordan Spieth.

The US pair have played together in the last two Ryder Cups and Spieth was Thomas' best man at his recent wedding in Franklin, Tennessee.

Despite Woods withdrawing from the Hero World Challenge last week with plantar fasciitis in his right foot, he is still set to tee it up in Belleair this weekend.

The plan is also to still play with Charlie in the PNC Championship next week. The Woods duo took part in their first-ever joint interview which was released this week from the Notah Begay III Junior National Golf Championship in November.

When and where is The Match No.7?

The Match will take place at Pelican Golf Club in Belleair, Florida. It will take place on December 10 and the action will start at 6 pm (ET) with each player wearing a microphone.

What channel will The Match be on?

The Match will be shown live on TNT and it will also be shown on other platforms such as TBS, truTV, HLN and Bleacher Report. Capital One is the title sponsor of the feature.

What is the format of The Match?

It will be a 12-hole event and although the format hasn't been announced yet, it is likely to be four-ball better-ball match play.