Phil Mickelson did his best Bubba Watson impression on day one of the Sentry Tournament of Champions. 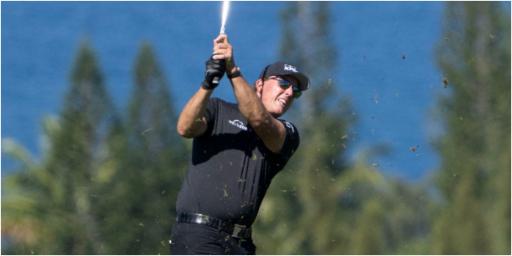 Phil Mickelson, even at the age of 51, is still amazing us with shots such as these on the PGA Tour.

Mickelson was coming down the par-5 18th on the Plantation Course in round one of the Sentry Tournament of Champions when he had one thing in mind.

Driver off the deck. This was Mickeslon doing his best Bubba Watson impression as he impressively found the green.

Classic Lefty showing us that he's not content to just ride off into the sunset of the PGA Tour champions.

He's still going to mix it with the big boys with shots like this.

Mickelson, $8million richer, struggled on day of the first event in 2022 on the PGA Tour. Not with his game, but physically.

WATCH THE SHOW BELOW

Related: Phil Mickelson weighs in on a GolfMagic debate

He shot 2-under par as Jon Rahm and Patrick Cantlay showed no signs of rust and Cam Smith surged into the lead.

But he later told the media:

"It's a beautiful place and every hole has such scenery. But it is a hard golf course to walk. I'm hurting. It's vertical. It's hard. It's not easy. And that was the biggest challenge because I was winded going up and down those hills.”

Perhaps there was a reason why Lefty hasn't played this tournament in more than two decades.

That magificent driver off the deck into 18 saw him finish with a birdie (his third in four holes) to finish strongly.

Related: Phil Mickelson asks for no hate over post about Omicron