PGA Tour pro Scott Piercy was taking off his shoe in between shots playing the third round of the 3M Open at TPC Twin Cities. 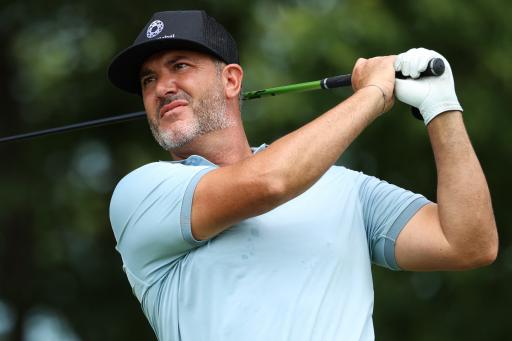 PGA Tour pro Scott Piercy was doing something a little bit peculiar in between shots playing his third round at the weather-delayed 3M Open at TPC Twin Cities.

Piercy, 43, is in search of his fifth PGA Tour win and found himself in a strong position heading into the final round in Minnesota, holding a four-shot lead.

Yet it was a bit of a struggle as a new pair of shoes had caused a "nickel sized blister" on his foot. The American pro was taking off his shoe in between shots up until the 14th hole.

It did look a bit funny, if we're being honest.

Still, it worked out alright.

More: How the PGA Tour should fight off LIV, according to Mahan

He later told the media: "Yesterday I wore a new pair of shoes and kind of rubbed my heel, kind of a dime-sized, nickel-sized blister on the back of my heel. [I] tried to do some stuff last night to doctor it up to get ready and just every move the shoe made was painful, so I just took it off.

"[It] didn't hurt to walk without it, so I just put it on when I hit and seemed to do okay."

He added: "When you walk that weird, you kind of -- your body kind of adjusts, so putting the shoe back up on and trying to get set up over it correctly, I felt like I couldn't get into my setup like I normally do and I felt that's like where a couple of the loose shots came from, along with the tiredness. But, you know, hopefully get a good night's rest tonight and ready to go tomorrow."

Piercy looked in a commanding position heading into the final round.

Check out the payout info here.

Tony Finau and Doug Ghim were inside the top five players trying to chase down Piercy.