Rickie Fowler pinpoints reason for downfall after first round without Joe

Rickie Fowler admitted he was still hearing the voice of his long-time caddie Joe Skovron during his first round at the FedEx St. Jude Championship. 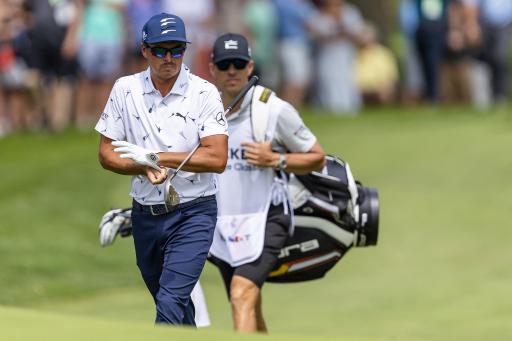 Rickie Fowler admitted he was still hearing the voice of his long-time caddie during his first professional round of golf since they split up.

Fowler, 33, revealed earlier in the week he was parting ways with Joe Skovron. They had been together since the American made his debut in 2009.

The popular PGA Tour pro, who could soon become a LIV Golf Invitational Series player, claimed this was "a team decision".

He has now turned to Cobra Golf employee Ben Schomin. At least temporarily. But the early indications appear to be good.

Fowler opened up his postseason on the PGA Tour with a 5-under opener at TPC Southwind in Memphis at the FedEx St. Jude Championship.

Remarkably, that was his lowest opening round on the PGA Tour since last July's 3M Open.

He has also revealed that he changed his flat stick for the fifth time this season.

Fowler had limped into the FedEx Cup Playoffs by virtue of others' failings and LIV Golf suspensions. He even missed the cut last week at the Wyndham Championship and had to check his phone constantly to find out his status. He qualified on the number: 125th in the rankings.

"It was going to be more about me taking ownership and putting more of a workload on myself and more accountability," Fowler told the media of his decision to part ways with Skovron.

"I still had plenty of his voice and one-liners and stuff in my head, so he [Skovron] wasn't on the bag, but he was definitely present."

It's clear that sometimes players' problems are in-between their ears. But for Fowler at least, the stats do back-up that he's struggling with his putting.

He has spent the better part of his career well into the top half in the Strokes Gained: Putting statistics, according to the official PGA Tour website.

He led the Tour in that category five years ago. Last season, he was 126th in this category. Now? He's 179th.

And Fowler doesn't know what's gone wrong. He explained: "[My putting] kind of goes all over the place.

"I would say a lot of it is read-based, but at that point when you're not trusting your reads, speed's a little off, so there's plenty of variables in putting.

"If you're not starting it online, it doesn't matter if you have the right read or speed.

"I would say one of the biggest ones [problems] has been getting proper reads and then on top of that, trusting that.

"So with that, like I said, speed can become a little inconsistent based on trust, but I think stemming from reads."

If Fowler is to advance to the next stage of the playoffs in the next leg at the BMW Championship, where the top 70 will battle it out, he needs a T-11 or better here this week.

He's off to a good start!

Next page: Horschel says LIV Golf players have been "brainwashed"