Sam Burns has given the low-down on his post Open Championship holiday to Greece with Scottie Scheffler before the FedEx Cup Playoffs. 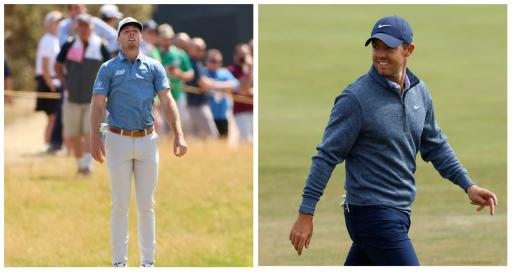 Northern Irishman McIlroy, 33, admitted that after that devastating Sunday at St. Andrews he did not touch a vegetable or visit the gym for two weeks.

It appeared to make McIlroy a little bit sluggish as the FedEx Cup Playoffs got underway at the FedEx St. Jude Invitational.

McIlroy found himself eight strokes adrift of the lead. As for Burns, he admitted he gained as much as eight pounds in eight days during his short break after finishing T-42 in Scotland.

Though that appears not to have had too much of a detrimental impact on his golf.

His time away was spent on a trip to Greece with his good pal Scottie Scheffler. The Masters champion appears to have come back to golf a little bit grumpy, though.

Scheffler also caused a social media storm after his "incident" with the latest high-profile player set to jump ship to LIV Golf.

Burns also spent his time off watching his good friends get married.

Here's the full, amusing exchange from the press conference after Burns shot an opening 5-under 65

Q. What have you been doing the last two weeks?

SAM BURNS: We were in Greece for a week after The Open with Scottie and his wife and my wife and then we got home and went to Park City, Utah. One of my best friends growing up got married so we went up there for a few days. Last week, trying to get back in shape a little bit after -- I gained a lot of weight on vacation, eight in eight days.

SAM BURNS: Yeah, so that was good.

Take a look at a holiday snap here:

Anyway, all the chatter in the postseason will likely be about who will emerge the winner of the FedEx Cup, taking home a mammoth check of $18million: Scheffler or Cameron Smith, who all-but confirmed his future path after his opening round in Memphis.

Don't rule out Burns, though.

He's already guaranteed a starting berth at the Tour Championship by virtue of his stellar season, in which he has won twice. He successfully defended his Valspar Championship title in March, then in May claimed his fourth PGA Tour victory at the Charles Schwab Challenge.

He told the media: "Yeah, I think being a little bit higher up now in the FedExCup, securing a spot in Atlanta definitely gives me a little bit more freedom in this first event just in the sense that I have some security in the year-long race."