Rory McIlroy entered the second round at Bay Hill with a two-shot lead but finished two shots behind the impressive Viktor Hovland on Friday. 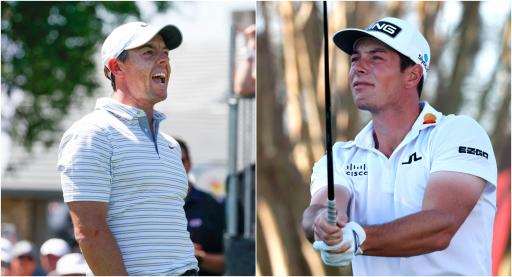 Rory McIlroy remained in the thick of contention at the Arnold Palmer Invitational in round two, but surrendered his two-shot lead to Viktor Hovland.

The Northern Irishman began his round on Friday with a two-shot advantage and despite bogeying his first hole, he made three birdies on the front nine to reach 9-under-par.

With his near-ace on the par-3 7th hole and his birdie on the eighth hole, McIlroy tied the clubhouse lead set by Hovland who shot his lowest ever score at Bay Hill.

The four-time major champion disappointingly bogeyed two of his final four holes to finish on 7-under-par, shooting a tame score of level-par on the day.

Nonetheless, on only his second appearance on the PGA Tour in 2022, McIlroy is in good shape to win his second title at the Arnold Palmer Invitational.

As for Hovland, he now has a two-shot advantage over his 2021 Ryder Cup teammates McIlroy, Tyrrell Hatton and American Talor Gooch.

Gooch, who won his first PGA Tour title at the RSM Classic back in November, almost became the only bogey-free player on Friday if it weren't for a blemish on his final hole.

Hatton won his first PGA Tour title at this event in 2020 and the highlight of his second round was an amazing 51-foot putt on the par-3 7th hole to reach 7-under-par for the event.

Former FedEx Cup winner Billy Horschel briefly held a solo lead on 8-under-par after making birdie on each of his first three holes.

A double-bogey on the 17th hole heavily damaged his scorecard but the 35-year-old shot 1-under-par in the second round to sit three shots behind Hovland.

World No.1 Jon Rahm, who missed one of the shortest putts in PGA Tour history on Thursday, recovered with a 70 on Friday to sit seven shots behind the lead on 2-under-par.