A month ago, Scottie Scheffler had never won on the PGA Tour but he is now a two-time champion after his win at the Arnold Palmer Invitational. 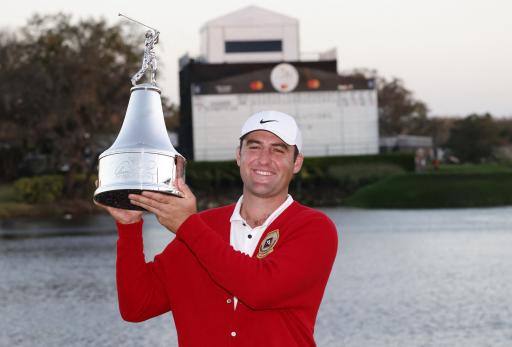 Scottie Scheffler won again on the PGA Tour after coming out on top on a dramatic final day of the Arnold Palmer Invitational.

At the start of February, the 25-year-old hadn't won yet on tour in his career. Now he has prestigious wins at Bay Hill and the WM Phoenix Open to his name.

Scheffler survived a birdie attempt on the 72nd hole from Billy Horschel to avoid a playoff in Florida. Ironically, Horschel beat Scheffler in the final of the Dell Technologies Match Play in 2021.

Over four rounds at Bay Hill, only 10 players finished under par in what was a treacherous and difficult week with long rough and swirling winds.

Related: Rory McIlroy stares down golf fan who gives him abuse in crowd at Bay Hill!

Gooch, the winner of the RSM Classic back in November, bounced back into a share of the lead with a birdie on the 3rd hole, but a double-bogey at the 5th hole dented his chances once more.

Hovland, already a winner on the DP World Tour this season, made a superb birdie on the par-3 7th hole to lead on his own on 7-under-par, but this was one of many twists and turns at the famous event.

Another birdie at the 11th hole dispelled bogeys on the 8th and 9th holes and he now had a two-shot advantage on 6-under-par.

Scheffler began the day two shots behind the leaders on 5-under-par and through 12 holes, he made three birdies and three bogeys to remain in contention.

A critical par save on the 15th hole included a 21-foot putt and this now gave him a one-shot advantage on 5-under-par over Hovland and also Gary Woodland who had steadily reached 4-under-par too.

Tyrrell Hatton, who won this event in 2020, shot a 3-under-par 69 on Sunday to post 4-under-par for the week. He faced a long wait to see if this was good enough for a playoff.

Woodland, the 2019 US Open champion, then experienced ecstasy and agony. After making an eagle on the 16th hole to lead, he then double-bogeyed the treacherous par-3 17th hole to return to 4-under-par.

Horschel stuck around on the back nine too. After a tough start, he made birdies on the 12th and 15th holes to stay on 4-under-par and within one shot of Scheffler with just a few holes remaining.

Scheffler posted his level-par 72 and Hovland failed to find the birdie he needed on the 72nd hole to reach the American on 5-under-par.

Horschel had the final chance and despite hitting a solid shot to the 18th hole, his putt from 32 feet slid by and Scheffler was celebrating again.

Next Page: Rory McIlroy snaps his putter as he reaches boiling point at Bay Hill!