Is Sahith Theegala on verge of first PGA Tour victory at RSM Classic?

Sahith Theegala suffered heartbreak on more than one occasion in the 2022 PGA Tour season while chasing his first win, but this could all be made right in Georgia. 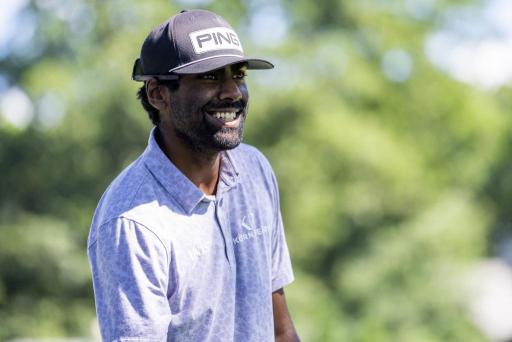 Sahith Theegala revealed his anger and frustration at his "fat" approach into the 18th hole on the Seaside Course while in pursuit of his first PGA Tour win at The RSM Classic.

It led to a two-putt from 38 feet, around the distance Theegala felt he'd been putting from all day in the third round at Sea Island Golf Club.

But his par on the 54th hole was a vital contribution to his 2-under 68. It was also his 16th par of the round with birdies thrown in on holes 2 and 11.

Theegala will enter the final round in Georgia on 13-under, one shot behind Patrick Rodgers and Ben Martin. He has already recorded two top-10 finishes in this new season, but what he wants is his maiden Tour title.

"I'm sure a hot mic might've caught some stuff. Nothing too bad. It was just like the one on 18 was probably the most frustrating," Theegala said after the round on Saturday.

"Just a perfect 9-iron, little cut, my bread and butter, and I just hit it half an inch fat and it came up short left, which I feel like I was hitting it to 45 feet all day and I was just like, gosh, dude. Like just all day. Are you kidding me?

"I was just a little frustrated out there. But I feel like I always do a decent job of letting it out, but by the time I'm at the next shot - it's obviously out of my mind. Yeah, it's nothing too crazy, I guess.

"I just think I'm going to be in the second-to-last group, so I'll just kind of use that as a positive thing and see if I can, you know, just go out there and do my thing and post a score, or kind of get going early and just see where it holds up," he added.

"But I'm not too worried about chasing anything. Just going to keep doing it. I think I'm playing well enough to put myself in contention on the back nine. Obviously, when it comes to the back nine, I'll be looking at the leaderboard to see where I am."

Theegala's first flirt with victory came at the WM Phoenix Open. While in contention, he found the water with his tee shot on the short par-4 17th hole at TPC Scottsdale which ended his chances. Scottie Scheffler went on to win his first Tour trophy instead.

Leaderboard after Round 3 @TheRSMClassic ⛳️

Then at the Travelers Championship, he found the fairway bunker on the 72nd hole and needed two shots to get out of the sand. He made a double-bogey to surrender his lead to Xander Schauffele.

Theegala will hope things are different this time around in what is the final Tour event of the year. The likes of Brian Harman, Kevin Streelman and Harry Higgs will also be hoping Sunday goes their way.

The RSM Classic- Third round leaderboard