Golf legend Sir Nick Faldo may have just re-ignited a feud with Rickie Fowler as he made a bold prediction about Tiger Woods and son Charlie Woods. 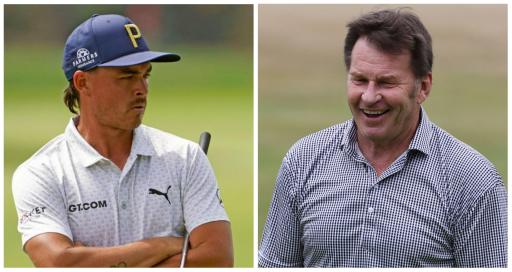 Sir Nick Faldo has called on Rickie Fowler to ditch his famous orange outfits as he predicted Tiger Woods and son Charlie will win the 2022 PNC Championship despite not being confirmed in the field yet.

Faldo recently joined ESPN's College Game Day. It's the same programme that Jordan Spieth hopped on a few weeks ago.

Part of Faldo's segment on the show included the golf icon picking out who he thought would win certain games.

Okay, so I'll be completely honest - this writer is absolutely clueless about College Football.

I simply cannot believe these picks...

Apparently it was a bold take for Faldo to pick Oklahoma over Oklahoma State.

"Oklahoma State's all about Rickie Fowler. It's too much orange, Rickie. You've gotta ditch the orange. You've gotta come out with some new outfits for next year, orange is so last summer, isn't it? I'm going with Oklahoma."

Very clearly this is a tongue-in-cheek jibe towards Fowler. But the pair do have history. Faldo previously criticised Fowler over his commercial commitments.

Faldo previously made a cheap shot towards the American on Twitter by suggesting if Fowler missed the cut at the 2021 Masters he could "film another six commercials".

It caused a bit of a social media storm and Faldo later said sorry.

Elsewhere, another bold prediction from Faldo came in the form of the Englishman saying he believed the aforementioned Woods and his son Charlie will win the PNC Championship in December.

Faldo retired from calling the action on the PGA Tour earlier in the year after 16 years in the booth.

He was reduced to tears during his final broadcast.