TB12 Body Coach on Tom Brady and The Match: "Tom does EVERYTHING 100%"

TB12 Body Coach Drew Ryan spoke exclusively to GolfMagic about his work with the company started up by NFL legend Tom Brady and Alex Guerrero. 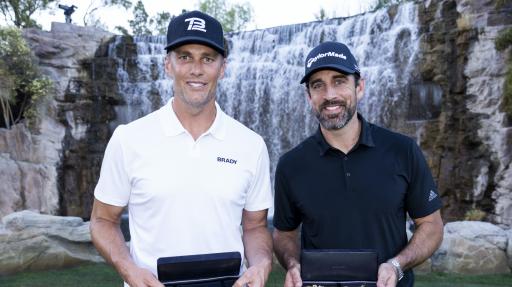 Speaking exclusively to GolfMagic about his work with Brady and the other body coaches at TB12, Ryan revealed the staunch and dedicated work ethic that has won Brady seven Super Bowls and five Super Bowl MVP titles.

Ryan joined TB12 in 2019 where his work emphasises manual therapy techniques, the valuation of upper and lower extremity injuries and the rehab of soft tissue injuries.

The company, co-founded by Brady and his longtime Body Coach Alex Guerrero, has five pillars that they focus on in their work: Pliability, Nutrition, Hydration, Movement and Mental Fitness.

Ryan and other TB12 Body Coaches can be found in centres across America in Foxborough, Boston, Tampa, West Palm Beach and Philadelphia. The athletic trainer from Jersey Shore was on-site in Las Vegas as Brady competed in The Match for the third time on June 1.

"With anything that Tom does in his life, there is 100% commitment there. If he’s going to play football for another year, you better believe you’re going to get 100% out of him," Ryan said about Brady who incredibly came back out of retirement in March at 44 years old.

"The Match is no different, he got a practice round in the morning before whereas anything else, if he is going to do something 50%, his mentality is ‘why do it?’

"If you’re going to do a match like that, spending time to travel and prepare, having an event like that is important too because it can benefit a good cause. The preparation is still going to be there and I think that showed this year more than in the previous two.

"I think that's the best thing about these matches. It takes these elite athletes and the game of golf shows that there are some human elements there.

"When Josh Allen hit it in the water and a fan went to get it, that’s cool! The commitment level to The Match wouldn’t be any different to just a weekend round, or if it’s competing for a spot on a team, the commitment level is still 100%."

This time around at Wynn Golf Club, Brady finally tasted victory alongside Aaron Rodgers as they beat fellow NFL quarterbacks Patrick Mahomes and Josh Allen 1 up.

In his two previous appearances in The Match, Brady teamed up with LIV Golf rebel Phil Mickelson, but he has lost twice to teams comprising Rodgers and Bryson DeChambeau, and Tiger Woods and Peyton Manning.

Ryan told GolfMagic that TB12 work with PGA Tour golfers and he expressed his admiration for Tiger Woods who sensationally returned at The Masters in April.

This was the 15-time major champion's first appearance on the PGA Tour since the horror car crash in February 2021. He also went on to play in the US PGA Championship, but he withdrew at Southern Hills.

"The fact that he is standing on the golf course is a miracle and props to the PT that he worked with and the medical team behind him. For him to be where people view him as Tiger Woods, there is still a long road there," Ryan added.

"He’s made leaps and bounds compared to where he was after the car accident. His swing now will change for good. He has had a series of serious medical procedures and we tell everybody not to look at (golfers like) Dustin Johnson as the guy is a freak of nature. Tiger has used what he has available to him to the best of his ability.

"The fact that he was standing there at Augusta, I’m going to think about that when I’m 50 years old and hopefully hitting with my son at some point and you will tell stories about that."