A couple of snippets of Tiger Woods and his son Charlie sitting down together at the Notah Begay Junior Golf Championship have been released with the full interview to come on Golf Channel this week. 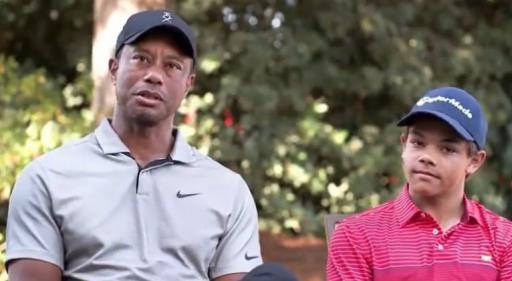 Tiger Woods and his son Charlie have taken part in their first-ever joint interview which took place at the Notah Begay Junior Golf Championship in November.

In the short snippets, Woods talks about the golf course being the perfect setting for him and Charlie to spend time together, as they did at the junior golf event which was held in Florida at the beginning of last month.

According to TWLegion on Twitter, Golf Channel will show footage of Charlie competing in the finals of the boys 12-13-year-old section at Koasati Pines at Coushatta, as well as the chat on December 7-8.

Woods caddied for his son who appeared to come of age with his height and size since his appearance with his father at the PNC Championship in December 2021.

During another event from the Notah Begay III Junior Golf Championship at Mission Inn Golf Club at the end of September, Charlie shot his lowest-ever score of 68 and spoke in his first-ever media interview.

Tiger Woods with an emotional reaction to his 54 holes with his son Charlie at the National Championship! Catch the full exclusive interview on December 7th & 8th on @golfchannel from 7:00 - 9:00pm EST! #jgnc #nb3jgnc #seeyouatcoushatta pic.twitter.com/UF0DopU1Kt

"I'm supporting him wherever he wants to go. And then obviously, providing opportunities for that direction, so as a parent, our job and responsibility is to provide opportunity and support," Tiger said.

"It's been fun that he's taken a passion to something that I've enjoyed, but there's so many - at the end of the day, the amount of time we'll be able to spend together and the bonding that happens by being able to go out there and play golf and rip one another - it's just non-stop right.

"If you're able to jab it, you've got to be able to take it as well. He's done a pretty good job of that!"

It seems Woods and his good friend Justin Thomas have already got Charlie started with the on-course sledging. After Thomas hit a superb shot on the par-3 12th hole at the Hero World Challenge, he threw his tea peg at the on-looking Charlie.

The Woods duo were spectating during the event in the Bahamas which was won by Viktor Hovland for the second consecutive season.

"Have you ever seen Rory off balance on a shot? No. Not ever. That's one of the things my Dad instilled in me. You should be able to balance and hold your finish until the ball rolls and stops."