Charlie Woods is swinging it exactly like Rory McIlroy, and Tiger Woods reveals why he has asked him to do just that... 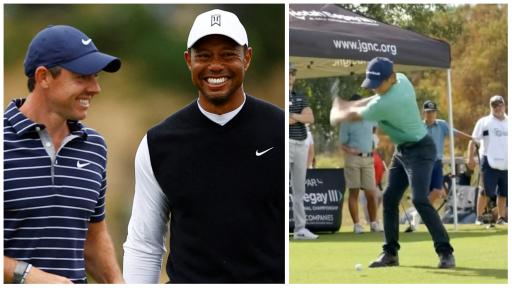 Charlie Woods has already drawn comparisons to the incredible golf swing of Rory McIlroy, and Tiger Woods has revealed that is exactly the player he wants his 13-year-old son to copy in order to take his game to the next level.

Tiger Woods spoke openly about a number of different subjects during his third-round stint in the NBC commentary box such as targeting another win on the PGA Tour, as well as another major championship.

Woods was forced out of this week's Hero World Challenge, the tournament that he annual hosts at Albany in the Bahamas.

The former World No.1 also spoke at large about his son, Charlie, whom is already drawing golf swing comparisons to that of current World No.1 McIlroy.

It's all part of the Team Woods plan.

.@DanHicksNBC hands it off to @TigerWoods to read his own promo for the @PNCchampionship.

When NBC then put up a side-by-side video of Tiger and Charlie's golf swings, Woods said: "I don't move like that any more, but Rory does.

"Have you ever seen Rory off balance on a shot? No. Not ever. That's one of the things my Dad instilled in me. You should be able to balance and hold your finish until the ball rolls and stops.

"You can swing as hard as you want, but you need to have balance."

Tiger, who turns 47 on December 30, also revealed how Charlie is already outdriving him on the golf course.

Woods is hoping to recover from his latest injury setback to compete with McIlroy against Jordan Spieth and Justin Thomas in The Match on December 10.

He will then join forces with Charlie in the 36-hole PNC Championship, which is a father-son tournament in Orlando.

The tournament takes place on December 17 and 18.

Next Page: Everyone is saying the same thing after watching the latest Tiger and Charlie Woods video