Will Zalatoris has BLANKED his former mentor following shocking tweets

Will Zalatoris says he has personally apologised to NBC's Dan Hicks and Brad Faxon over his former mentor's X-rated tweets. 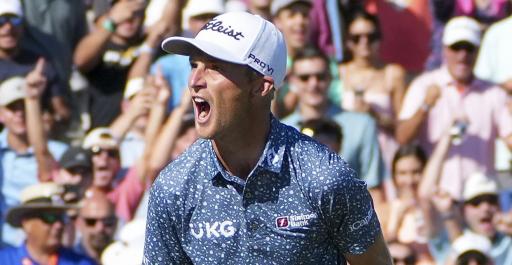 Will Zalatoris says he has blanked his former mentor Scott Fawcett following the X-rated tweets that he sent to NBC's Dan Hicks and Brad Faxon on Sunday night.

Zalatoris came through a sudden-death playoff against Sepp Straka to earn his maiden PGA Tour title at the FedEx St Jude Championship, and with it, vault his way to the top of the FedEx Cup standings.

Hicks and Faxon had made some comments about Zalatoris' putting stroke during the broadcast, and that did not sit well with Fawcett who went on the rampage.

Zalatoris, if you weren't aware, has had his fair share of social media trolls over his putting stroke.

He later admitted that it was his haters and NBA player Steph Curry who inspired his emotional reaction after draining a huge putt at the 72nd hole.

Fawcett's foul-mouthed comments included him telling Hicks to "f*** off".

He added in the post: "Zalatoris has the best speed control on tour so he f***ing earned it you d***."

Justin Thomas told Fawcett to "show some class" after seeing the tweets, which have now been deleted.

But speaking on Golf Today ahead of the BMW Championship this week, Zalatoris says he has personally apologised to Hicks and Faxon for Fawcett's comments.

He has also left Fawcett on Read.

"Scott Fawcett is not a paid member of my team," said Zalatoris.

"I in no way condone or support anything that was said in those tweets.

"I personally reached out to Dan Hicks and Brad Faxon and echoed that I don't condone what he said. Any interviews he's given have been unauthorised.

"He has tried to reach out to me and I have not spoken to him. I'm thankful to him for everything he helped me with in the ups and downs in junior golf but those statements are not a reflection of my values or me."

Fawcett has since taken to Twitter to confirm he has also apologised to Hicks and Faxon for his comments.

I’d say given the situation this hs as good as I could hope for. I too have reached out to @DanHicksNBC to offer my sincerest apology as well as Will. I do feel terrible for them that they got drug into my childish feud with @BradFaxon
Life sure is a spectacle of twist & turns! pic.twitter.com/Jp4Z2BtpgW