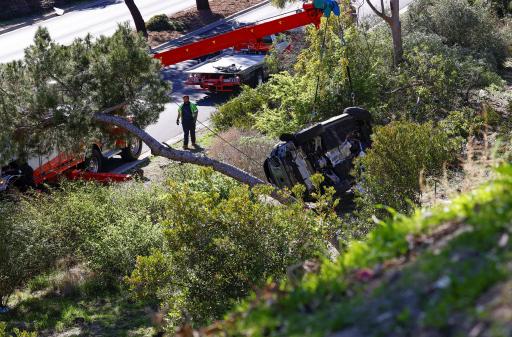 Tiger Woods was driving close to double the speed limit when crashing his car in Los Angeles in February, according to Los Angeles County's sheriff.

Woods, 45, is said to have been driving between 84 and 87mph on the 45mph speed limit in Ranchos Palos Verdes.

There is no evidence that Woods was impaired by drugs or alcohol at the time of the crash.

LA County sheriff Alex Villanueva said: "The primary causal factor for this traffic collision was driving at a speed unsafe for the road conditions and the inability to negotiate the curve of the roadway."

The 15-time major champion was "extricated from the wreck" by firefighters and paramedics after his car had crossed the centre-divider and then veered off the road, rolling several times before hitting a tree.

In addition to the speed at the first area of impact occurring at up to 87mph, sheriff Villanueva added the "estimated speed when the vehicle struck the tree was 75mph".

Woods suffered "comminuted open fractures" to both the upper and lower portions of his tibia and fibula in his right leg, as well as damage to the ankle bones and trauma to the muscle and soft tissue of the leg.

He underwent surgery and was then released from hospital earlier this month.

Woods is now recovering at home while his PGA Tour peers compete in the year's first major at The Masters.

Rory McIlroy and Justin Thomas recently went to visit Woods to offer their support. McIlroy also provided the media with an update of his condition at Augusta National this week.

LASD Captain James Powers said: "The car's so-called 'black box' data recorder showed Woods engaged the accelerator and never applied the brake during the incident. That could indicate he may have mistakenly hit the wrong pedal while trying to control the car."

Powers added: "It's believed that when you panic or you have some sort of sudden interruption while you're driving, your initial thought is to hit the brake and it's believed he may have done that but hit the accelerator."

NEXT PAGE: RORY MCILROY LEFT WITH NEW OUTLOOK ON THE MAJORS AFTER VISITING TIGER WOODS