Tiger Woods' former caddie Steve Williams reveals when the big cat told him he would retire. 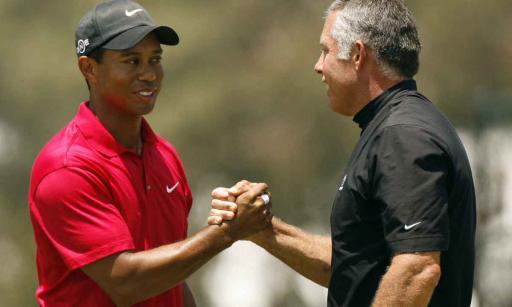 Tiger Woods’ former caddie Steve Williams has admitted the big cat told him he would retire once he reached 21 majors.

The 15-time major champion is three behind Jack Nicklaus’ record of 18, though it looks like adding another now would be the tallest of orders.

Williams has revealed in a BBC Sport podcast that the 46-year-old was absolutely obsessed with getting to at least 20 majors.

The 58-year-old Kiwi told the "All About Tiger Woods" podcast that his favourite number is 21 and once they reached that number "you’re not seeing me again."

Williams, who has also caddied for LIV Golf Investments CEO Greg Norman and Ray Floyd, told the podcast that he shared a "special relationship" with Woods.

"He was best man at my wedding and we had a special bond," he told the podcast.

"But I felt a tremendous amount of pressure caddying for Tiger. A successful week is just a win.

"Some guys are happy to be top five, top 10. If he doesn't win, he's not happy and when you get certain lengths of time when he's not winning, it's a tough job because you're feeling the pressure."

Williams said the most intense pressure he faced was when Woods was chasing the "Tiger Slam" at the 2001 Masters having already won the U.S. Open, the Open Championship and U.S. PGA.

If he won at Augusta National, he would have become the first player to hold all four of the modern major titles.

Williams told the podcast that Woods always told him he was "adamant" there was an opportunity to hold all four majors given the right rotation of courses.

"He'd just won the US Open by 15 strokes and the first thing he was thinking of was St Andrews," he said.

"Amazingly, he played better at St Andrews than he did at Pebble. Those were the two best weeks in terms of overall performance.

"When you're caddying for someone like Tiger who's on top of the game, it's something else. He was just focused on winning major championships. His whole goal was to eclipse Jack's record, that's what he wanted to do and his desire and work ethic to try and achieve that goal was second to none."

Woods recently revealed that the only reason he did not tee it up at the U.S. Open was because he was resting his leg so he could play the 150th Open.

Williams said the Old Course at St. Andrews provides the greatest test between caddie and player.

It is the ultimate test, because depending on wind direction and hole placement you play down opposite fairways and they all have bunkers you can't see and you've got to know exactly where those bunkers are.

"And you've got to know exactly where those pins are and which angle to come in from. It's great when the wind blows because it makes it a real challenge."

He concluded: "Tiger was obsessed with breaking Jack's record.

"We put every ounce of energy into that and I didn't see any reason up until the stage where it all unfolded that he wasn't going to eclipse Jack and it's a shame it didn't happen.

"I don't think any other player is going to be in a position to try and while he didn't, he gave it an unbelievable run, won four in a row and 15 majors. What more can you say?"

Next page: Bryson DeChambeau speaks about his LIV Golf deal