Tiger Woods: Window to play championship golf "not as long as I'd like"

Tiger Woods admits he won't take his health for granted anymore at the JP McManus Pro-Am. 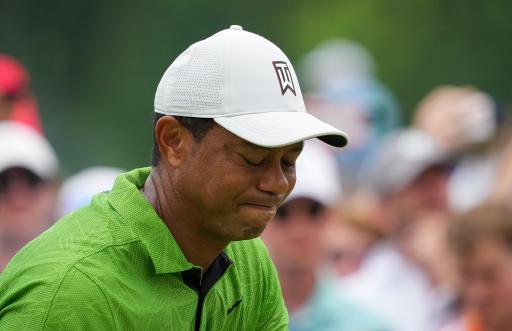 Tiger Woods says the window to continue playing professional golf at an elite level is "not as long as I'd like it to be” as he admitted he won’t take his health for granted anymore.

Woods, 46, admitted that he has always loved coming to Ireland and plans on staying here for a few more days to practise links golf so he can be as fully prepared as possible for the 150th Open at St. Andrews.

The 15-time major champion has appeared in good spirits at Adare Manor, the host venue for the 2027 Ryder Cup, when playing the JP McManus Pro-Am.

Woods’ short game was a little bit rusty on day one when he carded a 5-over par 75. He did, however, manage to wow the Irish fans with a hole-out.

Woods also joked that he wouldn’t tell anyone where he’s playing in the next few weeks because he doesn’t want “everyone” coming down to watch him.

Before he played the US PGA Championship at Southern Hills, a helicopter hovered overhead as Woods played his practice round in Oklahoma.

Some of his fans flocked to the course to. It was pandemonium. The club pro said it was like Beatlemania.

Asked how long the window will likely be for him to remain a high-level competitor, Woods admitted that it is not as long as he’d liked.

But he will always play golf, even if he has to uses someone else’s leg.

He said: “I don't know. I really don't. If you asked me last year whether I would play golf again, all of my surgeons would have said no.

“But here I am playing two major championships this year.

“Now if you say play at a championship level, well, that window is definitely not as long as I would like it to be.”

Woods admitted that all the hard work has been worth it has there have been some “very difficult days” where just getting off the sofa was “a hell of a task”.

He added: “Yeah, it's been worth it. It's been hard. I've had some very difficult days and some days which moving off the couch is a hell of a task, and that's just the way it is.

“As I said, I'm very thankful for all the support I've gotten, my treatment staff, all of my surgeons who are repairing this leg and keeping it.

“So, I have my own two legs, which I think is not only -- I tell you, I'm not going to take it for granted anymore, some people do.

“But people who have come close or lost a limb understand what I'm saying, but you have difficult days and also you have great days and first are not what they used to be, that's for sure.

“But they are great days in which I can spend with my kids and do things that they can do at a slightly slower pace, but I can still do it with them.”

Next page: Scottie Scheffler can only laugh at this horrendous chip shot