Tiger Woods is hosting the Nexus Cup this week in New York, an amateur team matchplay event which offers many golfers a truly unique experience. 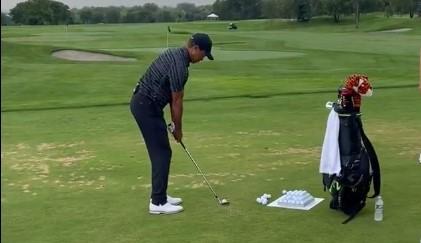 Tiger Woods and the TGR Foundation once again have the privilege of hosting the Nexus Cup in New York this week, giving amateur golfers the chance to play in an exciting competition.

Described as the 'ultimate amateur golf experience', the Nexus Cup is a team matchplay event which allows you to not only play against other teams but the opportunity to spend time with Woods himself.

Each team receives personalised apparel at Liberty National in New York and past winner's prizes have included spots in the Hero World Challenge Pro-Am, golf experiences at Tiger Jam and Rolex watches.

Today is the second day of the special event which allows golfers to play in the midst of the Manhattan skyline. Earlier on social media, footage emerged of Woods hitting some balls on the driving range next to four-time PGA Tour winner Sam Burns.

The 46-year-old hasn't been seen playing golf since he missed the cut at The 150th Open Championship in July, waving goodbye to the fans down the famous 18th hole at St Andrews.

#NEW: Tiger is on the range at Liberty National GC this morning pic.twitter.com/xRKKAgjFM9

It may not have been his last Open Championship appearance, however, he may have made his last walk at the home of golf after shooting rounds of 78 and 75.

In July, his caddie Joe LaCava set out a vague, un-confirmed schedule of events for the 15-time major champion for the rest of 2022 and the start of 2023.

He is expecting to play in the Hero World Challenge in December, a tournament which he hosts in the Bahamas, and he should tee it up with his son Charlie at the PNC Championship as they did in 2021.

Woods could also play in the Genesis Invitational in February which is organised by his foundation, followed by another tilt at The Masters.

Although this is not a certain schedule for the man who was involved in a serious car accident in February 2021, these are the fleeting visits on the PGA Tour that Woods is likely to make.

Away from the course, Woods has been instrumental in the PGA Tour's revamped schedule in 2023 which will include four new Elevated Events and increased prize purses.