Woods was pictured at a fund-raising event for his foundation which is celebrating its 25-year anniversary... 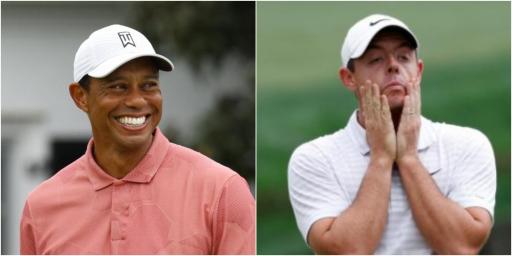 Tiger Woods made his first public appearance this week in the Bahamas nine months after his car crash.

This was where his latest comeback has started and there is no doubting it will be referenced in years to come should when he wins again.

Woods, 45, spoke to the media for 38 minutes in a press conference this week where he revealed his leg could have been amputated.

In candid comments about his future in golf, the 15-time major champion said he's not sure to what level he will be able to get back to.

The clock is ticking, he said, also suggesting he does not have the desire or the body to commit to a full-time practice schedule.

Instead, he wants to play a few events a year and "ramp up to them" like the great Ben Hogan once did.

The Masters may come too soon for the brilliant champion but he could potentially play at the 150th Open at St Andrews next summer.

The home of golf would be a fitting return to the game for the big cat, who has won the Open three times including twice at St Andrews.

Woods has had an interesting week as the tournament host of the Hero World Challenge.

It was widely speculated he would hit some golf balls on the range in Albany, Bahamas.

What we didn't expect was to see Woods hit every single club in the bag: including the big stick.

Woods was also snapped speaking at a dinner party for his foundation.

He also was in attendance at a fundraising poker night.

And he was also pictured with a beaming smile alongside Rory McIlroy's ex-girlfriend Caroline Wozniacki with other notable golf superstars.

They are all reportedly ambassadors for Rolex.

McIlroy dated then popped the question to Wozniacki, now 31, after they got together in 2013.

In January 2014 their engagement was announced but they split up in May.

Tabloid newspapers and publications reported McIlroy, 32, split up with the Danish tennis player in a short phone call.