The 15-time major champion described Thomas as "like a brother" to his son Charlie. 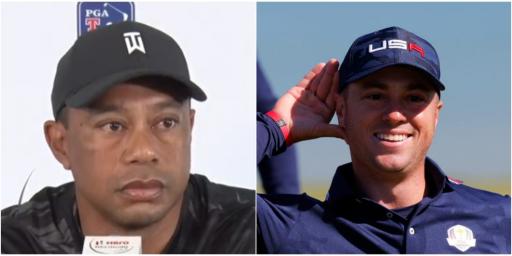 Tiger Woods will make his return to golf next week at the PNC Championship with son Charlie Woods.

In recent months we have been teased with extracts here and there suggesting Woods has been doing well in his recovery process.

It started when he was snapped at a junior golf tournament with a black compression band on his right leg, leaning on a club.

Then we saw him walking gingerly around the course without crutches for the first time.

All of a sudden we had two words: "Making progress".

It was followed by a three-second clip of Woods clipping away a 7-iron.

The divot pattern suggested he had been putting in work. Then when he turned up to the Hero World Challenge he told us he had.

Many holes of golf have been played at Medalist Golf Club in Florida with his son.

Make no mistake, Woods only shows you what he wants you to see.

His Sunday red and black outfit he wore on the range as he striped balls suggested he is ready to be the centre of attention again.

Woods' range session clearly backs up the 45-year-old's assertion that he is able to participate in the sport of golf.

Now he is back and will play 36 holes in Orlando next week in what he has previously described as a "hit and giggle".

"This is awesome, welcome back."

Elsewhere, Justin Thomas, whom Woods recently described as a brother to his son Charlie, said:

Tiger is so cool. What a machine. In the same year I thought it would be a minor miracle if he could ever walk again, he’s playing competitive #golf on tv. Legend

Woods told us in his press conference that the clock is ticking and he lacks the desire to commit to a full-time practice schedule like before.

He's climbed Mount Everest many times in his career, he said, adding that he got that "last major" and ticked off a few more.

Judging by this news, we have definitely arrived at base camp.