Olympic Osteopath believes Tiger Woods WILL be at The Open: "Absolutely, 100%!"

Tiger Woods confirmed yesterday that he and his son Charlie will play at the PNC Championship, but Poora Singh believes The Open Championship is also a realistic goal. 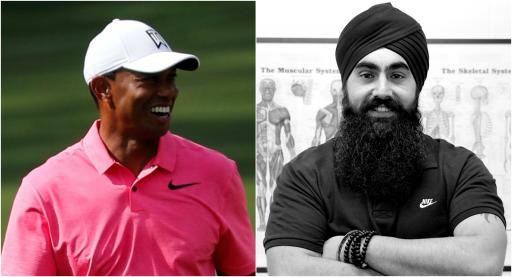 Top osteopath and sports therapist Poora Singh believes that Tiger Woods could definitely play at the 150th Open Championship at St. Andrews in 2022.

Singh, who is the Lead Therapist for the Challenge Tour and who also works in the Race to Dubai Physio Unit, spoke exclusively to GolfMagic about Woods' progress and recovery from his car crash in February.

After resurfacing to public life last week at the Hero World Challenge, Woods has now confirmed that he and his son Charlie will play at the PNC Championship on December 17-19.

Singh previously predicted that The Masters would have been an ambitious target for the 45-year-old, however, The Open Championship could be in his sights.

RELATED: THORBJØRN OLESEN AFTER BEING CLEARED: "I HAVE PAID A HEAVY PRICE FOR MY MISTAKE"

"Yes, absolutely 100%. He has been very honest. If there is enough time for his team to get involved and to bring up the strength within his tissue (in his injuries) and test it as well," said Singh.

"And then all they have to do is factor in the rest of it: the flying, the jetlag, all the rest that is going to happen with that. All of that affects your coordination, your speed, your dynamics.

"This is Tiger we are talking about. I’m sure he will have the best of the best to get him over and get him ready for the event. He’s not going to want to play it just to play it, he’s going to that competition to win it!

"I’m never surprised by Tiger. Like everyone else, I’m a huge fan and I was so excited seeing him do it (swing video). You could definitely see the hesitation in him doing it and I think he’s doing it the right way.

In his press conference at the Bahamas, Woods spoke of his desire to play at St. Andrews, a venue where he has won two of his three Claret Jugs.

But at the same time, 'hit and giggle' events, which is arguably what he means by the PNC Championship, are the only options on the table right now.

A full career on the PGA Tour is off the table. This is no surprise when we consider that he had surgery to open fractures in his right leg and amputation was an option.

The 15-time major champion has been spotted on the driving range a couple of times now and Singh explained the stages of his recovery and also, the effectiveness of the black brace on Woods' right leg.

"There are three aspects that we have to break down. So there’s the aspect of what the medical team have said to him as in: ‘this is what we want you to do…’ Then it’s what he wants to do and there’s what his body can do. There needs to be a thorough conversation before, during and after," Singh explained.

RELATED: TIGER WOODS CONFIRMS HE WILL PLAY THE PNC CHAMPIONSHIP WITH SON CHARLIE

"Look at the stuff he has come back from - He has that ability to get through this hard part. A lot of athletes fall down in this part, where they are trying to put the effort in and the body is showing an inability to put it through and they get really disheartened by it. There is persistence with golf and I think that is across the board with anybody who plays golf.

"The force that is going through the foot is lateral, it goes from one side to the other, it doesn’t go forward and back. That’s a very tough movement for those bones to be taking and given the surgery he has had, given the mechanics and the screws etc.., you want to ensure that no excessive amount of force goes laterally through the ankle, foot and leg.

Team Woods is officially back at the PNC Championship!

Tiger and Charlie Woods will tee it up in Orlando on December 18-19. pic.twitter.com/2kSOPUYGhn

"All that is doing (the brace) is absorbing a little bit of that force so it doesn’t put too much into his leg. Bones don’t just take forward-and-back force or left-and-right force, they take rotational force.

Singh is a clinic director and Osteopath at the Edgbaston Performance Clinic in Birmingham. He has worked with Team GB at the past two Olympic games and he has also worked with Aston Villa, Birmingham City and Everton football clubs.

He and his team had planned to be out in South Africa for the mini-series of the DP World Tour, but unfortunately, the emergence of the new Covid-19 variant put an end to these plans.

Singh is certainly no stranger to spending time with the best players from the DP World Tour such as Tommy Fleetwood.

As well as being an expert in sports therapy, he is a huge fan of Woods like the rest of us. To hear his positive thoughts on Woods returning to The Open next year were extremely encouraging.

NEXT PAGE: "I'D BE ASTOUNDED IF TIGER WOODS MAKES THE MASTERS": OLYMPIC OSTEOPATH EXCLUSIVE