"I'm playing as a Dad and I couldn't be more proud" 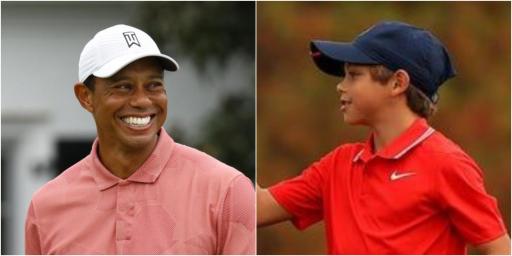 Tiger Woods has confirmed he will play the PNC Championship with his son Charlie Woods.

The big cat, 45, took to his social media channels to confirm the news.

It comes after he was seen hitting balls on the range at the Hero World Challenge.

Woods was seen hitting every club in the bag and even wore his classic red and black outfit on Sunday.

Team Woods is officially back at the PNC Championship!

Tiger and Charlie Woods will tee it up in Orlando on December 18-19. pic.twitter.com/2kSOPUYGhn

Woods has not played professional golf since he crashed his luxury SUV in February.

He had to be extricated from the vehicle and did not speak in public until his press conference in Albany, Bahamas last week.

There he detailed just how difficult his recovery has been.

Woods stated that he thought he was halfway through his recovery process.

He could not commit to when he would be able to play on the PGA Tour again, but hopes to one day.

The PNC Championship will take place over 18-19 December.

PGA tour
Tiger Woods
charlie woods
pnc championship
masters
Previous
Best Golf Tips: Manolo Vega teaches us how to hit the PERFECT FADE
Next
Thorbjørn Olesen after being cleared: "I have paid a HEAVY price for my mistake"