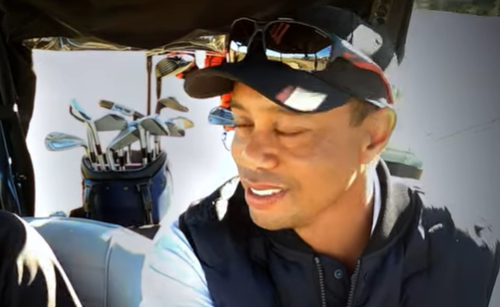 Yet more video footage has emerged of Tiger Woods less than 24 hours before his horror car crash in Los Angeles back in February, after Woods gave his blessing for the content to be released to the public.

Episode One of 'A Round With Tiger' - available to watch on GOLFTV and filmed in partnership with Golf Digest - went live last week and saw Woods giving actress Jada Pinkett Smith, wife of Hollywood star Will Smith, a golf lesson at Rolling Hills CC in California.

This week, Episode Two sees Woods link up with former Miami Heat basketball shooting guard Dwyane Wade, who reveals he took up the game all because of the 15-time major champion.

Woods appears in good spirits and begins by helping Wade with each of the clubs in his bag, before they then head out onto the course in a golf cart.

Wade talks about Woods being classed the 'GOAT', to which Woods replies: "I'm not the GOAT. No, I'm not there yet. I'm not done."

Woods also speaks about how special it was to play alongside his son Charlie in the PNC Championship at the end of last year.

The footage was filmed just a day before Woods suffered traumatic leg injuries when losing control of his vehicle, crashing into a tree off the side of the road on the morning of February 23.

It was later confirmed the former World No.1 had been doing nearly double the speed limit on the road, but that there was no sign of impairment while driving.

Woods has now had surgery to treat his leg and is now recovering at home in Florida. It is still unknown as to whether he will ever return to the PGA Tour.