How did Tiger do that?! 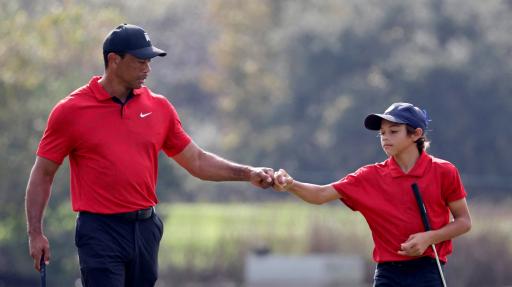 Tiger Woods left golf fans and analysts stunned at the PNC Champonship on Sunday when he spun his golf ball on the putting green.

Golf Channel's Brandel Chamblee was particularly in awe at Tiger's trick alongside his 12-year-old cub Charlie Woods. Watch the video below.

"I’ve seen Tiger do some amazing things, as we all have, but I’ve never seen him do what he just did," said Chamblee after watching Woods spin two golf balls on the putting green out of his hand.

Tiger and Charlie went on to finish solo second in the annual father-son two-round Scramble tournament, firing a final-day 57 to finish on 25-under par and two shots behind winners John Daly and his son John Daly III.

Chamblee, a one-time PGA Tour winner, then compared the trick to another that he had seen Woods do back in the day.

"We’re standing on the tee waiting for the group in front of us, and he takes a tee and he’s got it in his hand and he throws it at the ground and it sticks in the ground," added Chamblee.

"And then he picks it up and did it again. I was like, give me that tee. Is that a weighted tee or something? So I tried it and I couldn’t do it.

"But I spent the next three, four months getting to where I could do it. The key, you got to snap it just right, and you got to release it just right. I was so proud of that move.

"You know, I’d do it every now and again and somebody would go, well, how do you do that? I’m like I’m not telling you.

"But that pales in comparison to throwing a golf ball out onto the green and getting it to spin back."

NEXT PAGE: THIS INCREDIBLE TIGER WOODS STATISTIC SHOWS HIS DOMINATION OF GOLF!