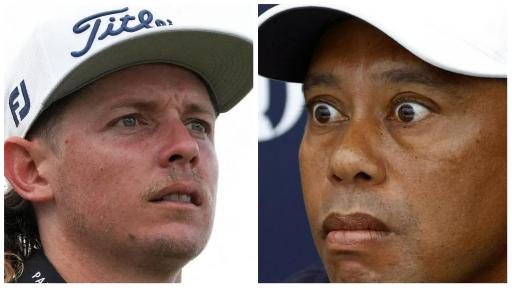 Haney, 67, believes the world rankings are going to quickly get out of hand when LIV Golf star Smith, who is currently ranked third, will end up being around 50th on the ladder as a result of LIV Golf Tour events remaining shut out (at least for now).

The same thing has recently happened to the likes of major champions and former World No.1 players Dustin Johnson and Brooks Koepka, who now find themselves 38th and 48th respectively in the OWGR.

Just think, in a couple more months Cameron Smith will be ranked 50th in the OWGR. If you call yourself the Official World Golf Rankings then figure out how to rank the best players in the proper order. https://t.co/WbBoGZZXuZ

"Just think, in a couple more months Cameron Smith will be ranked 50th in the OWGR," tweeted Haney, who coached Woods from 2004 to 2010 during a span that saw him win six major titles.

"If you call yourself the Official World Golf Rankings then figure out how to rank the best players in the proper order."

Haney and Woods went their separate ways when Woods withdrew from the 2010 Players Championship.

Woods has since gone on to win only one more major since leaving Haney, of course coming memorably with a 15th career major at the 2019 Masters.

Related: Tiger Woods reveals he will play with Charlie Woods at the PNC Championship

Haney's latest tweet about the OWGR comes at a time when Smith is on the verge of yet another win in 2022.

But since the Australian PGA is on the DP World Tour, alongside the Joburg Open in South Africa this week, Smith will receive some much-needed world ranking points for his efforts come Monday morning.

Smith, 29, takes a commanding three-shot lead into the final round of the Australian PGA Championship at Royal Queensland.

The 150th Open champion is bidding to win his third Australian PGA title since 2017. He is also looking to wrap up his fifth tournament victory of the year.

Should Smith go on to win on home soil on Sunday, he would also become the second LIV Golf player to win on the DP World Tour this year, following Spain's Adrian Otaegui who also won on home soil at the Andalucia Masters.

Smith joined the Saudi-bankrolled LIV Golf Tour just weeks after etching his name on the Claret Jug for the first time in his career at St Andrews in July.

He recently spoke about his decision, and how Rory McIlroy tried to keep him on the PGA Tour.

But Smith ended up signing a deal with LIV Golf in the region of $140 million.

He then went on to capture his first LIV Golf title in Chicago.

Smith whinged about the world rankings earlier this week.

He also gave an impassioned plea for LIV Golf players to be allowed to play in golf's four major championships in 2023.

Haney's rant about the world rankings is not the first one this season.

He went in hard back in August.

But there is not just disgruntlement about the OWGR over on LIV Golf right now.

There is frustration on the PGA Tour, too.

Jon Rahm hit out at his own world ranking position before and after winning a third DP World Tour Championship last Sunday.

Rahm called the OWGR a "joke" after learning he would still remain in fifth spot in the rankings despite having gone 2-1-4-1 in his last four worldwide starts.

The Spaniard's latest victory came in a 50-man season finale on the DP World Tour, and as a result, it meant a lack of points.

Rahm considered it was unfair, especially given the strength of the field he was up against at Jumeirah Golf Estates.

McIlroy's views about the recent changes made to the OWGR were in stark contrast to those of Rahm's.

DP World Tour CEO Keith Pelley has since weighed in on their disagreement.

In a document explaining the latest changes, they said:

"OWGR's field rating calculation has been modernised so that fields will be evaluated based on the skill level of every player in the field, rather than just those in the field among the current top 200 of the ranking.
"With this enhancement, minimum point levels, flagship tournaments and home ratings are no longer needed, removing the bias that can result from their use.
"Additionally, all players making the cut will receive ranking points according to the points breakdown.
"The other primary components of the OWGR system will remain the same."

Does the OWGR need a radical overhaul? Will LIV Golf tournaments finally receive OWGR points in 2023? Or will they remain shut out for a while longer yet? Share your thoughts and comments over on the GolfMagic social media channels.